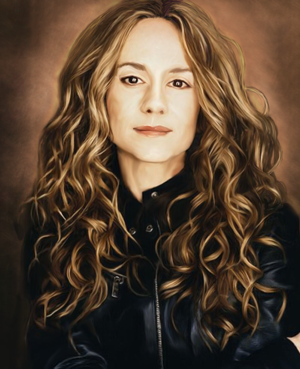 Physical Description of Persona:
Small in stature even by Pernese standards, she stands just over 5' tall. Her hair was gold like her dragon in her youth but has darkened with the turns. Her eyes are dark almost black and seem to draw one into her soul. She is slight of frame but well rounded. She has a slightly lisping contralto voice.

Emotional Description of Persona:
Cyradis has never let her size be a factor in her dealings with riders and staff of the Weyr. She is a strong and well organized woman who keeps excellent records. She is meticulous with her record keeping and quite detailed. The Weyr she serves has never suffered any shortages while she was managing those areas. Fiery in a confrontation and tender with her mate she is sometimes a contradiction to many. She gives orders with the expectation that they will be obeyed with long turns of practice. Cyradis also has a rarely shown humorous side. She was even considered goofy when in her youth but her Golden Panitath matured her and responsibility, unfortunately, all but buried this side of her.

History of Persona:
Cyradis was raised in the Vintner Crafthall at Amethyst Cliff Hold and was a Master Vintners daughter. She had several brothers who all preceded her in age and who became Vintners like their father. She learned a great deal just by exposure although she was not allowed to formally study the craft.

Searchriders came to the Hold when she was 16 as there was a gold egg on the sands at Dragonsfall Weyr. She was a bit surprised but happy when the Master gave his permission for her to go with them. At 17 she'd Impressed Gold Panitath and become one of several Junior Goldriders in the Weyr. When the northern Weyrs opened she was sent north to help with their repopulation. By 29 she and Panitath had been selected as Weyrwomans Second.

Panitath was flown several times by bronze Brath over the turns and she became weyrmates with N'lon as their love bloomed. Three children were forthcoming from this union which lasted more than 17 turns. Her fourth and youngest child was the result of a flight her weyrmate did not win. While in the north she befriended a Master Vintner who, learning of her interest, taught her the art of liquors. She creates and stocks several of her own creations. Some of which can be found in her storage rooms in various states of process.

Personal tragedy came when an earthquake destroyed the Amethyst Cliff Hold and two of her brothers were amongst its victims. However it was the sudden unexpected fall and death of the Senior Weyrwoman in the back passages of the weyr that changed the course of her life. Her greatest detractor became Weyrwoman when her dragon rose before Panitath. After turns of trying to get along with the scheming and jealous younger Weyrwoman, Cyradis requested transfer to another Weyr. Cyradis and Panitath were sent south again. This time to Dolphin Cove Weyr where their maturity, experience. and skills were needed to assist the Weyrwoman, train young goldriders, and diversify the gene pool.

Almost over night Cyradis found herself 'Acting' Weyrwoman when Janani transferred. Her relationship with N'vanik became rocky from that moment. He didn't trust her or believe she would stay at Dolphin Cove and it seemed to her it didn't matter what she said on the subject.

When it came time for Panitath to rise again Cyradis was confirmed as Weyrwoman with N'vanik as her Weyrleader. Over time they learned to work together and even trust one another. Happily she has found love at Dolphin Cove and weyrmated with K'deren. Not only that but they have had a son who was born at one of Panithath's Hatchings.

Another wrench was thrown into her life when a former lover showed up as a transfer to lead one of the wings. But D'hol and she mixed like oil and water. She's only recently told him that her youngest daughter Kielya is actually his daughter. They've learned to work together though their relationship is complex.

Dragon's Name: Panitath
Dragon's Age: 28
Dragon's Colour: Gold
Description of Dragon:
Panitath is a brilliant gold with a dusk of green gold (almost bronze) where her wings join her body and shading toward the tip of her tail. She is slightly above average sized for a gold and has a commanding presence, at once joyful and serious. She is dominant expecting all to obey. She has all the innate presence of the proudest of her species. She loves her rider and is quite protective. She fully believes her riders declaration that she is by far the loveliest dragon to have ever graced the skies of Pern.

Shadow, Brown Firelizard: aged 24, hatched m12 d8
A gift from her weyrmate on the birth of their first child. He is a deep brown almost black color of her eyes with lighter wingsails. He was named Shadow for his habit of being where ever his person is. He will sun on a patch of floor or Panitath when the mood takes him. But mostly he likes to sleep on whatever document Cyradis wants to work on at the time.

An effective messenger he inevitably returns to lurk somewhere near his person.