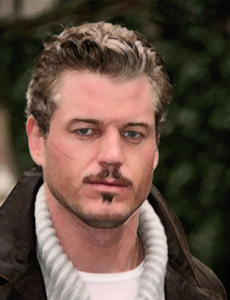 Physical Description of Persona:
G'nir is just less than six feet tall and normally build, he is neither lean nor stocky. He has blond hair and light grey eyes. His noble features are almost unbelievably handsome, despite the old scar on his right cheek. He moves gracefully.

Emotional Description of Persona:
G'nir is confident, arrogant and always well-mannered gentleman. He is perfectionist, who believes in setting an example and works hard to excel in everything: in leading wing, in hidework or in bed. He believes that everyone should have fair hearing before judgement. Being dragonrider, he has to admit that women can craft and have equal rights, but deep down he feels that woman's job is to have children and look after them and her husband. Women have power only thru her children and husband. He dislikes violence and use of force. He believes in communication and negotiation. He can be very diplomatic, but he doesn't hesitate to voice his opinions either. He has troubles forming long term relationships with women. He can get them to his bed easily enough; they often fall for his good looks and he can be quite sweet talker when puts his mind into it. But for some reasons the women leave him just when they start to know each other bit better, and G'nir hasnt been able to figure out why.

History of Persona:
Born in Beryl Plains hold, he is the Lord Holder's third son. He was given name Grinir in birth. From early childhood, it was driven into him that he is better than common folk and that women's place is between cradle and stove. His childhood was that of a privileged member of the Blood. He and his brother were constantly competing for their father's approval and affection.
He got scar on his cheek when he was practising fencing with his brother and he decided to give the snotty little brother a lesson. That lesson taught Grinir to abhor violence.
His first sexual experience was in age of sixteen, with one of his mother Ladies-in-waiting. He suspected it was arranged.
He was twenty when the queens started to lay massive clutches and Searchriders were sent out. Grinir was Searched. His father accused the dragonriders of stealing his son, but Grinir was quite happy to go to Dragonsfall weyr. As a third son, he wasn't going to inherit anyway and he really didn't like the bride-to-be chosen for him. He Impressed bronze Nirreth in first try and he became G'nir.
When Norther Weyrs were reopened, G'nir was sent there. He rose to Wingleader soon enough, but the highest prize, weyrleadership, seemed to forever elude him. Over the Turns, he sired two children, his son Grilec and daughter Rinnea. Rinnea's mother died to birth complications and G'nir sent his daughter to Beryl Plains, to be fostered among his kin.
G'nir was forced to transfer, when he didn't get along with his new Weyrleader. He thought the man was simply incompetent and didn't hesitate to voice his opinion. He decided to return to Dragonsfall Weyr, where he had Impressed, despite the fact it meant step downwards in ranks. He is certain its just temporary denotion. He was right, he and Nirreth led the Weyr for next two Turns, first with Hygalia and with Saibra. Untill Chioneth chose otherwise.

Dragon's Name: Nirreth
Dragon's Age: 24
Dragon's Colour: Bronze
Description of Dragon:
Nirreth is average bronze both by colour and size. He is fine example of bronze dragon, with only few minor scars. His personality is more approachable than his riders. He is mild-tempered, good-humoured and social. He is sure of himself and his abilities, and can be authoritative when needed.