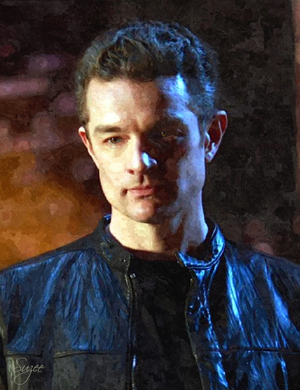 Physical Description of Persona:
D'hol is a tall lanky man; his short dark brown hair is flecked with grey at the temples and at the brow. Naturally curly, he keeps it cut short and brushed back from his brow, but when wet, the curls reveal themselves. A long thread score mars his left cheek down to his jaw and neck, obviously a close call for the bronze rider. While not attractive in the classic sense, he has aged well, giving his face a rugged allure.

D'hol's eyes are hazel with hooded lids and slightly arching brows. His jaw is strong and is accented by a slightly cleft chin, and his cheekbones are high and defined, giving an almost exotic cast to his features. His smile is startling; it is rarely given openly but the flash of white teeth reveals dimples in his lean cheeks. That one rare expression turns him from merely attractive to intensely handsome.

Emotional Description of Persona:
D'hol is not one of those charismatic bronze rider-heroes from Harper tales. He's blunt, tactless, and can be ruthlessly cold and efficient. He is however, unfailingly honest, even if his brutal sense of honesty hurts someone's feelings. He's not the type to sugarcoat anything.

He'll cut someone down with a smile if he thinks it's necessary; he often does. His temperament isn't geared to yelling or screaming. He has found that calm vitriol and slashing sarcasm works far better than losing his temper.

Like many Bronzeriders, D'hol is a proud man and a naturally born leader. He is however, stubborn to a fault and isn't above bullying the lesser ranks to get done what he thinks needs to be done. To D'hol, the ends justify the means. With his wing, D'hol is a strict, tough but remarkably fair man. He takes his job very seriously and despite his cut-throat personality, he has been known to inspire deep loyalty from members of any wing he leads. He will not ask them to do anything he will not and he tends to look after their needs closely to ensure that they are in the best fighting form.

Though he can make a dangerous enemy, D'hol can be a good friend, if one can get past his outer demeanor. He's one of those friends who always gives a straight, unbiased answer and has been known to be an excellent confidante to those who know him well. Surprisingly, D'hol has a love and weakness for children. They bring out a soft side of him that is rarely seen.

History of Persona:
Born in 1160 before the current Pass, D'hol, born Dernhol was the fostered child of ranking riders at Dragonsfall Weyr and so was brought up with a deeply entrenched sense of loyalty and duty to the Weyr. As a young weyrbrat, his childhood was typical though he was spoiled by his mostly absent parents. He tended to be bossy to the younger children in the weyr, but never outright bullied if there was a chance of being caught.

He stood for Candidacy as soon as he was able, but did not Impress bronze Yumath until he was 16 turns. It was a period of growth for him forcing him to learn that with his dragon's hide color came extra responsibility that he had never had. It did not come easy for the young man, but eventually he took on the role expected of him. He did not however, gain the diplomacy that his Weyrlingmaster had wanted. It was also there that he met his lifelong friend, Wylra, rider of green Girlath. They were lovers for a time until personal tragedies struck.

At the age of 25, he transferred to Thayan Peak Weyr and remained until other Weyrs in the South began to open. He was transferred from new Weyr to new Weyr, assisting to build and provide assistance to the new Weyrleaders, but never staying long enough to form deep attachments.

When the Northern Weyrs opened, D'hol was sent north to aid in setting up and assisting in training in the new Weyrs. The confident man eventually fell for a younger goldrider, Cyradis, but his affections were unrealized by the woman, even after his bronze caught her gold. They had a torrid affair, but she refused to leave her weyrmate for him. Her refusal hurt his pride and his heart; he forced himself to grow colder and harder because of it and as soon as he was able, left her behind. He remained in the North for several turns between different Weyrs, always going to where he was needed most. Soon, however, there was an opening in the Southern continent. When offered a transfer to Dolphin Cove, he eagerly took it, especially after he realized that an old "friend" of his was now the Weyrwoman. He walks a fine line between loving and hating Cyradis, even after Turns apart.

----
Though his heart remains much in Cyradis' hold, D'hol has found companionship with a much younger rider, Jeyme, even taking her as a weyrmate after the loss of her pregnancy shook them both. He is affectionate with the greenrider, and has found that he does love the younger woman, though he does not always show it in ways that are expected.

Due to his own missteps, D'hol and Jeyme parted ways and she left the Weyr with their son. The loss devastated him and he fell to drinking that only ceased when his daughter Kielya made him promise to stop. He has not forgiven the loss, and it has made him harder, colder, and less likely to forgive error.

--
When D'hol began experiencing a constant dull pain in his abdomen, the Weyrhealer sent him to the Dolphin Hall to be examined. D'hol was given horrific news; he has a mass within his abdomen that may prove fatal and though the Healers can attempt to cut it out, D'hol was told the risk was high should it necessary. D'hol has not allowed the surgery, for though he doesn't fear death, the last thing his pride will allow is to die ill and fevered in a bed. He has decided to do his duty as long as he can and has told no one that his time may be limited nor that he is ill. Instead, he has decided to do his duty to the Weyr as long as he can, even though he is in near constant pain. It has changed his perspectives a great deal, forcing him to acknowledge his own missteps.

Dragon's Name: Yumath
Dragon's Age: 38
Dragon's Colour: Bronze
Description of Dragon:
Yumath is a deep brassy bronze with lighter bands over his wing sails. He is marked by a wide thread score across his back which is almost white against his hide.

Yumath is as arrogant and self-assured as any other bronze, but he's more lazily calm about the fact. The dragon simply knows he is the smartest and the most experienced so therefore is the best. He's past the age where he has to prove himself to others; his assurance is simply part of his being and he carries it with him. He'll let the younger bronzes bugle their greatness. He knows his.