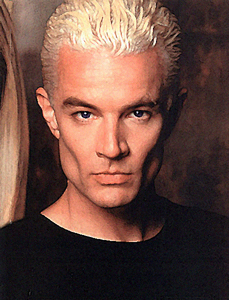 Physical Description of Persona:
Standing at 5'9, Ma'din is muscular with very little fat on him. His muscles are well defined and compact and it is obvious he takes care in maintaining his physical fitness. He keeps his pale blond hair swept back from his brow, but it has a tendency to curl when in a disarray or when wet; he has darker brows that slash over dark, but compelling blue eyes. Ma'din has a strong jaw, high sculpted cheekbones and sensual lips that are usually twisted upwards in a smirk. A small threadscore scars his left brow, giving him a further rakish look. He looks like a young, pale, blonde version of his father, D'hol.

In stark contrast to his paler coloring, when Ma'din is not in riding leathers, he prefers to wear dark clothing. He's usually found wearing black or dark red; should people find him to look foreboding, he'll enjoy it even more.

Ma'din gets noticed. It has been said that his entire demeanor screams "sensual danger" and for many that's attractive. He doesn't actively cultivate it, it's simply who he is. Surprisingly, however, for someone that is so anti-authority as Ma'din, he's surprisingly charismatic. His smile, a simple flash of white teeth, can be both charming and alluring, but still manages to retain the hint of a barely leashed predator.

Emotional Description of Persona:
Rebellion, thy name is Ma'din. Subversive, sarcastic, and often rude, Ma'din does not like playing by the rules. He is one of those rare men who truly do not care what others think of him; he knows who and what he is and makes no apologies for it. He dislikes authority and the irony of having to submit to it as a dragonrider is not lost on him. He's smart enough not to outright defy an order, but will follow it in his own time and manner; should there be any loopholes, he'll find them. He also has a knack for reading people and their body language; he uses it to get under their skin to push whatever buttons they may have if only to see how they may react.

His personal relationships are few. Aznith and his siblings are the only things Ma'din really cares about. It is his love of his dragon that makes Ma'din surprisingly good in the wings. He's sharp, quick and cunning in Threadfall which makes up for his utter lack of empathy and care in a social environment.

History of Persona:
Born the result of a mating flight, Maholdin's mother was a drudge who got caught up as a flight moth. She was a lazy creature who quickly abandoned her offspring to the weyr creche, and though the young child often tried to get her attention, he often failed. It wasn't until he was 12 that he was told who his father was, a bronze rider named D'hol.

Furious and feeling abandoned by both parents, Maholdin became the terror of the weyrhold. He acted out, fought, and got in more trouble than many of the other children in his creche group. He was able to behave long enough to Stand and impressed brown Aznith at his first Hatching.

Ma'din became a problem weyrling wing and was refused graduation twice because he simply would not abide by the rules. He showed promise as a rider, but had difficulty respecting authority. Eventually he was placed in a wing and his behavior was tolerated to a point because he was skilled in the wings.

Dragon's Name: Aznith
Dragon's Age: 16
Dragon's Colour: Brown
Description of Dragon:
: Aznith is a large brown with a longer than average wing span. His head is blockier and more defined than most, echoing his riders
own defined features. His coloring is rich and dark with lighter mottling along his chest and belly. There is a light thread score that
traces along his right side, the pale scar mark a sharp contrast to his hide.

Aznith is a quiet but surprisingly intense dragon. He is stable and often soothes his more tempermental rider, but when focused on something that interests him, his attention doesn't waver. He prefers being active, not liking to sit idle.