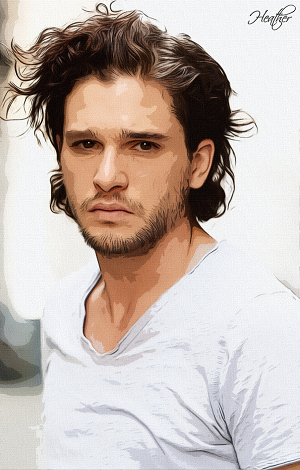 Physical Description of Persona:
R'nar inherited his mother's curly hair, although his is a shiny, obsidian and kept cut chin length in a shaggy frame around his face. His onyx eyes are set beneath a pair of heavy black eyebrows, that are usually furrowed in thought.

R'nar hit the peak of his growth in height at 5'9", which is quite a bit taller than his mother, and eye-to-eye with his father. His body has begun to thicken from the rigorous activities of a dragonrider.

R'nar can often look serious, or imposing, but when he smiles the transformation is stunning.

This has created an ambitious thirst within R'nar to prove himself to his parents. He desperately wants to prove that he is worthy of their attention. R'nar is often too serious and thinks about things too much. He is, however, loyal to a fault, and with a Weyrleader for a father, and a Weyrwoman for a mother, he has an instilled respect for authority figures.

History of Persona:
R'nar was born the second child of Cyradis and N'lon and could be described as an interesting mix of the two parents. Early in R'nar life his parents split apart and both ended up taking on new weyrmates and having more children, leaving R'nar with several half-siblings. From the time he was old enough to attend Hatchings with his parents, R'nar has wanted to be a dragonrider more than anything. Since he was still rather small and puny at age twelve, R'nar's father believed it best he wait until he was fourteen to officially Stand.

After three Turns of Standing on the Sands, with no luck, and with so little attention from his father, R'nar decided to move to Dolphin Cove, where his mother was Weyrwoman, to try his luck on the Sands there. It seems that the change in location was beneficial for him, as R'nar Impressed to a bronze dragonet, the first in the clutch, named Iorath.

Weyrlinghood was rather uneventful for R'nar, although he did become best friends with one of his clutchmates, Greenrider A'vel. The two, although an unlikely pair, found that they had many things in common and continued their friendship even after Weyrlinghood.

At nineteen R'nar fell, stupidly, head over heels for a Candidate new to the Weyr- Ranni. Even though she was a bit odd by conventional standards, and even though she duped A'vel into taking her to the Weyr under false pretenses, R'nar found himslf inexplicably drawn to her. What he did not realize was that Ranni was using his status as a bronzerider, and son of the Weyrwoman, to make sure that she was not sent back to Sunstone.

After Ranni Impressed a green dragon, R'nar felt sure that they were destined to be together, but the greenrider quickly told him that she no longer had need of him, since she had only been in a relationship with him to offer herself protection. To add insult to injury, Ranni had lied about taking her teas and it was soon discovered that she was pregnant with R'nar's child.

On the eighth day of the second month of Turn 10, Ranni delivered Eranar, their son, who was a couple of sevendays early. The labor and delivery were complicated and Ranni spent a couple of days unconscious and clinging to life.

M8 D19 T10, Ranni and Sukiith perished in threadfall. Unable to bear the memories of living at Dolphin Cove without her, R'nar transferred to Barrier Lake with his son.

Dragon's Name: Iorath
Dragon's Age: 2
Dragon's Colour: Bronze
Description of Dragon:
Iorath is a bulky, coppery bronze, an impressive size for his age. With age he has shed some of the softness around his middle, and exchanged it instead for the lean musculature of his sire.