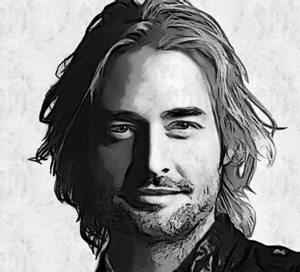 Physical Description of Persona:
N'vanik is just over six feet and well-built with lean muscle he began to develop even before becoming a rider. A small Threadscar on his left cheek does not detract from his good looks. He has dark blonde hair that grows straight and is kept long. Most often he has a day or two of stubble on his face. His hazel eyes can sparkle with mischief as easily as they smolder with anger.

Emotional Description of Persona:
Once angry and aloof, N'vanik has grown into a confident, even warm, man. Doubts and feelings of unworthiness can still trouble him from time to time, the legacy of a difficult early life.

He is casual, almost too casual, and has little use for formality outside of what is necessary for Wing discipline. When provoked he has a fiery temper, and woe to those who cross him. N'vanik fiercely protects those he cares for and is willing to bend or even break rules for their sake.

History of Persona:
Born at Jade Harbour Hold, his early life was not a happy one. N'vanik's mother died when he was young, and his father was abusive. When he was 14, he ran away from home and lived holdless. For turns he drifted, traveling with caravans or working at various holds. When a Searchrider offered him a chance to stand, he was hesitant to give up his independent life. But the lure of an easy life as a dragonrider was too good to pass up. Only weeks later he Impressed Loseth and for the first time in his life he felt love and acceptance. He quickly became the bane of the Weyrlingmaster, defying his authority at nearly every turn. Later as a wingrider he was lax in his duties, frustrating his wingmates and causing them to wonder how he ever Impressed bronze. He transferred to Dream's End shortly after it reopened, but the move did little to improve his attitude.
When Thread began to fall, there was a sudden change in him. With a menace to fight, his performance in drills improved dramatically. Outside of his immediate duties however, he was still arrogant, disrespectful and temperamental. After a fight with his Wingleader got physical, it was decided that he should again be transferred to another Weyr.

At Dragonsfall, he began to repeat the same old patterns: fighting, drinking and volatile relationships. Then one night Talryne showed up at his door, newly dragonless and lonely. Feeling responsible for her dragon's death, he took her in. Over time he fell in love, and for both of them it's their first stable relationship.

One day a girl showed up and declared herself to be none other than his daughter. N'vanik does his best to be part of Cosani's life, but she has little interest in getting too close.

When Traelyn threw her flight open at Dolphin Cove, N'vanik took the chance. His surprising win meant a huge adjustment in his life, and after Turns he has finally settled into his role as Weyrleader.

N'vanik kept his position even after the Senior Weyrwoman changed twice. While they had a contentious early relationship, he and Cyradis are now close friends, sometimes lovers, and true partners in leading the Weyr.

Dragon's Name: Loseth
Dragon's Age: 22
Dragon's Colour: Bronze
Description of Dragon:
Proud and competitive, Loseth is also friendly. He brings out the tenderness in his rider and is the voice of reason to counter N'vanik's quick temper. Minor scorings on his right flank and left forearm mar his otherwise even colored hide.