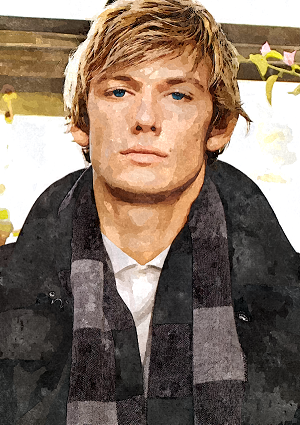 Physical Description of Persona:
Tall and lean, Jenackt is one of those young men who will never pack on thick muscle. His time in candidacy however has gifted him with toned and defined musculature, compact without being overbearing. With the better diet at the weyr, he is filling out, his shoulders broadening, but he will never be bulky and will retain the long lines of an athlete. His long arms and legs grant him a predatory grace and swagger to his movements and posture. His body is marked by scars, some old and faded from his time being Holdless, some fresher. The first many notice is the long, jagged scar over his shoulder from an attack at the Weyr. The second is a smaller, thinner slicing scar over his belly. His knuckles are heavily scarred from fighting or losing his temper and punching walls.

Jenackt has almond shaped blue eyes, smooth skin and a head full of straight, shaggy blonde hair that usually hangs over his brow and into his eyes. With high cheekbones, a fine blade of a nose and a slightly pouty lower lip, if he actually made an effort he would be considered quite a catch; Jenackt is breathtakingly gorgeous when cleaned up. He's unaware of his looks and the few times he's been called "pretty boy" have ended with him in a temper.

A matter that would definitely surprise those who actually speak to Jenackt is his baritone voice. Surprisingly deep for one his age, it startles those who have not come to grow accustomed to it.

Emotional Description of Persona:
J'ackt can be described in one word: survivor. He knows when to cut and run, but also when to hold on and fight for what is his. When it comes to what is his, he does not give up. His morals are also that of a survivor; he'll do what he has to in order to see his next day. He may not like what he may be forced to do, but he'll do it all the same if he must. He is also stubborn and will dig his heels in deeply if he gets even a glimmer of being forced into anything.

Due to his upbringing, Jenackt has little trust for authority or for people in general. He does show a weakness for animals, however, as long as they are not scheduled to be dinner. He's always on guard against people, sure that there's another angle that they're aiming to attack him (either physically or emotionally) from. As such, he doesn't like crowds or socializing; he's a loner, despite the efforts of Weyrleadership to fully integrate him into Weyr society.

Being raised as he was, J'ackt is blunt, sarcastic and curses like a drunken guard. He doesn't care what anyone thinks of him, man or woman. There is a great deal of rage and resentment curdled within him at what he sees as an injustice done by Holders to him and his family and the resulting death of his mother and infant sister that followed Turns later. He can be sullen and mono-syllabic, especially when embarrassed or uncomfortable.

J'ackt does not often smile but on the occasions that he does, it's usually a wry grin and a flash of teeth. His smile adds a mischievous glint to his eye. Rarely does he ever break into full laughter; he's not found much to ever laugh about.

J'ackt can be violently aggressive, but he's steadily learning to control his temper and rages. He is learning to walk away when he gets close to losing control, and relies on heavy exercise or sparring to release his impulses. He does however, have one rule: he has never laid his hands on a woman in anger, even if they strike him. He's is fiercely protective of women generally, but isn't above snapping at them or raising his voice when angered.

History of Persona:
Holdless through no fault of his own, Jenackt was raised by his father, a former hold guard. Though he never knew exactly why his father had become holdless (and learned never to ask), Jenackt only has very faint memory of living in an actual home.

His father was a harsh, bitter man, prone to more reprimand than comfort. For most of his early childhood his mother, far more of a gentle soul, remained a buffer between his father's temper and Jenackt's innocence. But life is hard when holdless, and his mother died in childbirth before he hit his tenth turn.

It was after her burial that his father took over Jenackt's "lessons". Jenackt learned how to fight, how to grapple, and countless drills on how to use a sword. It was quickly apparent that Jenackt had a raw talent for swordsmanship; his father was happy to sharply hone it. Swordplay became one of Jenackt's true passions, and he excelled through his father's gruff, sometimes brutal lessons.

Jenackt also learned that he would have to do what ever it took to make sure that he had what he needed. They raided gardens of holds at night. He learned how to fish and which cotholdings may have clothing or goods in easy reach and unguarded. His father also taught him never to take too much, only enough to not be too noticeable. That was the key, he was told, for holders were cruel people who would punish him far worse than his father could. They and the Weyrs could never be trusted.

Shortly after his seventeenth turn, his father succumbed to a wasting illness. Jenackt was left with nothing but his father's clothing, his old battered sword and the meager belongings that they had scrounged and stashed in the small alcove at the base of a cliff that they had made their home in.

He was alone. And for about a Turn, he remained alone, stealing what he had to from the cotholds surrounding Emerald Falls. Aware that he was wanted by authorities, he tried to leave the area but was betrayed and caught. Managing to escape, but injured, he found himself at Dolphin Cove Weyr. Fearing reprisal from the Hold, he gave a false name, Amitko, and a false background. Now he is at the Weyr and trying to keep his secret as best he can.

His true name and why he had given a false name was discovered by N'vanik after the first hatching. Though N'vanik has insisted the Jenackt begin going by his real name, Jenackt has told no one the circumstances of his history, keeping it private. There have been a few that have reached out to him, but he remains keeping people at a distance, still unwilling to trust. He does trust N'vanik, and privately sees him as the father figure he wished he could have had.

After Impressing Zith, J'ackt still had problems integrating with other members of the Weyr. He was held back from his Weyrling graduation due to his inability to relate to others and his lack of respect for some authority figures. He did find friendship with a fellow Weyrling, Saidrene. Not only were they intimate, but he also confided more to her than any of his other peers. He also developed a fractious relationship with another of the Weyrlings in his group, Alina; they enjoyed pushing each others buttons, but cared more about each other than most realized.

Eventually, he was placed in Cyradis' wing to develop and learn how to better interact with wingmates. He still keeps to himself and doesn't go out of his way to be friendly, a fact that concerns both his Weyrleader and Weyrwoman.

Alina and J'ackt finally Weyrmated shortly after he was stabbed by the son of a man he fought with. Adapting to weyrmating has been an interesting experience for him and he adores his weyrmate, Alina, showing her a gentle, kind side that no one else ever sees.

Dragon's Name: Zith
Dragon's Age: 3
Dragon's Colour: Bronze
Description of Dragon:
If there ever was a slinky dragon, Zith would be him. Lithe, sinuous, and graceful, the young bronze doesn't so much as walk as prowls. His hide is an even dark bronze shade all over with only a slight lightening along the wing sails.

A born hunter, Zith will try to stalk anything that he deems might be edible; J'ackt will have his hands full trying to keep him from eating passing pups and kits until Zith accepts that they are not potential food.

Stumpy, Canine: aged 2, born m1 d6
The runt of the litter, Stumpy was born with only the stump of his right front leg. He's still a pup, but the brindled canine comes from a large, muscular breed with thick jowls and the promise of a wide chest. His ears flop over, making him currently cute, but that cuteness hides a feisty personality that promises to make him into an interesting companion.