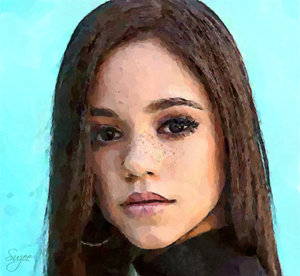 Physical Description of Persona:
Alina is of average height and rather shapely, with long legs and an hourglass waist. Her hair is long, stick-straight and black, her skin lightly tanned by the sun, and she has a sprinkle of freckles across her nose. Her eyes are dark brown and her features sharp in a heart-shaped face. She has pale claw mark scars on her legs from when she was run over by a dragonet the day she Impressed. Overall she's rather ordinary.

Emotional Description of Persona:
Alina is the younger of twin girls. She is clever and outgoing, pragmatic, sharp-witted and sharp-tongued, but she can also be a terrible gossip and a bit cruela trait that's amplified when she's with her twin, although Elana is often meaner than Alina can bring herself to be.

Alina is used to being in the shadow of her pretty, vivacious sister and knows she's the plainer of the two girls, a fact that Elana often brings up. She also knows that unlike Elana, nothing good is going to happen to her unless she works for it, but she's ambitious enough to make things happen. She battles a jealous streak when it comes to her weyrmate, J'ackt.

Alina and her twin Elana were inseparable from birth, but where Alina is dark and sharp, Elena is bright and bold. Alina was her red-headed sister's shadow, confidante, co-conspirer and follower, while Elana led, protected her, and got her into mischief. Elana was also the favoured child as both the eldest and the prettiest. Although the favouritism wasn't overt, both twins knew it and understood it to be the natural way of thingsuntil their younger brother was born and Elana was suddenly usurped.

Given that her father was a farmer, Alina knew from early on that her destiny was to marry and have children. But being raised on her mother's stories of love and life at Emerald Falls, both Alina and Elana dreamed of something more glamorous than a farmer for a husband. A good marriage could mean an easier, better life.

Knowing that she wasn't as obvious a catch as her pretty twin, Alina worked hard at her Harper classes in order to make herself more attractive. She's good at music, reading, problem solving and sums, although Elana took advantage of this and Alina often ended up doing her homework and helping her cheat at her lessons.

When the Searchriders came to Nadol Cothold they Searched Alina but not her twin. Alina still can't understand why, when Elana was the prettier, favored girl. She was even more surprised when she Impressed green Imarith at the second Hatching she attended. Adjusting to life as a dragonrider hasn't been easy for her.

Alina and J'ackt weyrmated in the eleventh month of the ninth Turn of the Pass.

Dragon's Name: Imarith
Dragon's Age: 3
Dragon's Colour: Green
Next Mating Flight: m1 d26
Description of Dragon:
Imarith is almost painfully curious and a little on the silly side, and Alina has given up hope that she'll grow out of it. Her hide is an even jade green from nose to tail, and she is on the larger side for a green.