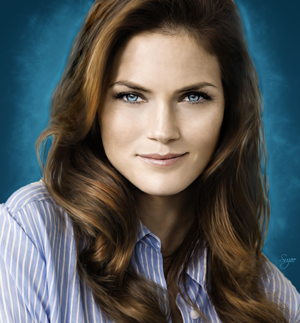 Physical Description of Persona:
Tall for a woman, the way Benani holds herself makes her look almost like a tower though not when compared to her husband. Her hair is kept long, very straight, and is a deep, deep brown almost black. It looks as if there is little more to it, but in the bright sun, it dances with deep red highlights. Her eyes are a pale blue, like the sky on a hot summer's day. Her face is oval, her chin and nose tapered. Her fingers are long, the envy of all instrumentalists and very supple.

Emotional Description of Persona:
Benani never aspired to be Lady Holder, but now that she is, she is giving the job her all. She had always known she would be a wife and hopefully a mother, but this new position has given her something to focus on. She is a hardworker, dedicated to her family above all else. Even the hold itself would not draw her attention if her family needed it - especially her husband. If anyone should hurt anyone in her family, she is slow to forgive.

History of Persona:
Benani was always a Daddy's little girl. She was the closest to her father of all the siblings and fairly took it upon herself to make sure he was taken care of, especially after the death of her mother. She got used to taking care of him and of other people, even taking matters that would normally be reserved for the Lady of the Hold when she was old enough. She has always been dedicated to her family as well as her Hold. She held more of a sense of responsibility at a younger age and took more interest in her father's affairs than some of his sons. Of course, Benani would never be a Lady without a Lord, but she never considered the position to be something she should attained. Power was not something she sought for the sake of having it.

When Benani was nineteen, a young man by the name of Zathris, son of Lord Ethris, came to visit Amber Hills. The two struck up a frienship that was continued in letters and more visits. After a turn of that, Zathris asked Benaroy permission to marry Benani and it was granted. The two wed and Benani went with Zathris to Willow Bend. They were there only a month when Benani was informed of her father's health deteriorating. She didn't ask, but Zathris knew that Benani wanted to be closer to her father. He sent her back and settled things at Willow Bend, then joined Benani at Amber Hills and became an assistant to the Steward. After her father's death, Zathris was chosen as Lord Holder and Benani attained the title of Lady.

Now with the turns Benani has recently been successfully delivered of twin boys. Zathan is robust like his father while Benaris is more delicate. They appear identical and it is hard to tell between them.

Camnae, Canine: aged 4, born m1 d23
Black and tan like her mother Livie, Camnae promises to be every bit as big when she reaches her full growth. Still a puppy Camnae is learning to play gently with Benani's children and the Lady herself. She does spend most of her time with the Lady Holder and a couple of hours each day training rather than socializing.

When playing she's the typical puppy but when training her demeanor changes and she takes on a protective role. But she's still learning. She seems to view the world with a perpetual grin.

Neepa, Runner: aged 8, born m2 d12
Neepa is deepest black without a single marking on her lovely coat. She has a sweet temperament and is easy to ride. At only about 15 hands she isn't as tall as the Lord's runner but the pair of them together are a stunning sight.