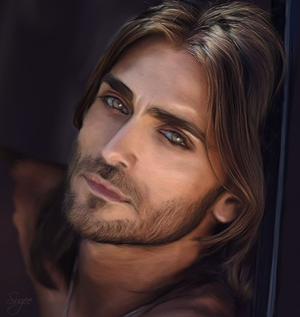 Physical Description of Persona:
Zathris is fairly tall at 6'0" and has a frame roped in lean muscle. A proud nose is chiseled into his face and he has a solid chin, high cheekbones and, for a man, full lips and thick eyelashes. He keeps his reddish-brown to his shoulders, often times keeps it tied back. Some might speculate he likes the long hair because of fear that he may wind up thinning like his father, Lord Ethris of Jade Harbour, when he gets older. Hazel eyes that contain flecks of green are warm and seem to hold a bit of humor. His smile has won many a lady's heart, but he doesn't always offer admiration in return.

Emotional Description of Persona:
Zathris can, at times, give off the impression that he's lazy with his relaxed posture, but don't let that fool you. The man will work harder than any other to do what needs to be done. He has never been and never will be a slacker. While his father tends to lean towards the conservative side, Zathris tends to be a bit more liberal in his views of women and what they're capable of; his relationship with his first wife Maisla helped him realize that women are more than child bearers and housekeepers.

Zathris is not a boisterous man, but neither is he quiet. He likes to laugh, but he also demands respect from others. While it's not that easy to get him flared up, he has a temper that once it is kindled, is hard to calm down. There have been times when he has had to walk away from situations lest he do something he greatly regret later. He can also be a bit obsessive at times, leading to long nights dealing with things and making sure that work gets done, even though it could probably be put off until the next day.

History of Persona:
Zathris never aspired to be the Lord of a Hold. That doesn't mean that Zathris didn't have ambition and goals, it just wasn't something that he felt he had to have. His father, Lord Ethris of Jade Harbor Hold, however, seemed to have a great desire for such a position,or at least to always have better than what he had. It was his father's cutthroat dealings and shrewd nature that turned Zathris off a bit when he was younger, though he did respect the man for the hard work and his ability to work through things.

With at least one brother older than him, Zathris didn't really consider that he might be chosen as heir to the hold when Lord Stefan died. While he knew that the eldest wasn't always the one chosen, he had always gotten the impression that Ethris preferred Ethizan to him. It may have been this that gave him an initial drive to work hard and, perhaps, prove himself. For what, he wouldn't be able to tell you; perhaps just to show that he was as good as Ethizan. Eventually, he began to help the steward of Willow Bend and found that he rather enjoyed the work, even if it wasn't a major hold like his father had desired. A proposal was set up for him to marry a girl from another minor hold, but Zathris met and fell in love with a young girl from Blue Fields by the name if Maisla. When he was eighteen and she fifteen, the two were married.

It was six turns after their marriage before Maisla became pregnant. The pregnancy was hard on her and didn't go well. In the fourth month she was put to bed and a month after that, she miscarried. During the miscarriage and she hemorrhaged and died. For two months after her death, Zathris barely moved from their room they had shared together, mourning and barely eating. Eventually, he emerged and began to live life again, taking up his duties once more.

After Lord Stefan's death and Ethris' stepping up as Lord Holder, it wasn't Ethizan that was chosen as heir, however, which came as quite a shock to Zathris when his father named him. A few months after the original Lord Holder's death, Ethris called Zathris to Jade Harbour, evidently want him near and with the intent on giving the young man experience within a major hold.

Zathris worked hard, but his laid back ways clashed sharply with his father's severity. Eventually, Ethris realized that his more liberal son would never run the Hold as he would like it, so Ethizan was then made Ethris' heir after all.

Hurt by his father's decision, Zathris returned to Willow Bend. Occasionally, he would travel to places where he had friends. One of these trips was to Amber Hills on runner business. It was while he was visiting that Zathris was introduced to Lord Benaroy's daughter Benani.

The two became friends rather quickly, and soon friendship became love. A turn later, Zathris asked Benaroy for his daughter's hand and the Lord Holder accepted. The two moved back to Willow Bend, until word was sent that Lord Benaroy's health was failing. Benani wished to be closer to her father, so he sent her ahead and took some time to take care of some issues at Willow Bend. A month later, he arrived at Amber Hills to be with his wife.

Rather than choosing one of the many sons of Benaroy that lived at Amber Hills, the Council chose Zathris to take the Lordship at Amber Hills in the wake of Benaroy's passing. It wasn't a position that Zathris had wished for, and despite the intial hard feelings from his brothers-in-law, Zathris put his Turns of stewardship into practice as the Lord Holder of Amber Hills.

Zathris marriage with Benani started out a rather easy whirlwind, and she successfully delivered a twin pair of identical boys, Zathan and Benaris. Tragedy struck Zathris when Benani was kidnapped from the Hold and held for several days hostage of a demented man named Crolarin. When Zathris finally got Benani back she was different, altered by the horrifying things she had survived at Crolarin's hand. It took several months for Zathris and Benani to reconnect, and Zathris strayed from his marriage with a fiery redhead named Barenziah. Despite his feelings for Barenziah, Zathris' heart belonged to Benani, and he sent Barenziah away from the Hold.

After things in their marriage began to improve, Benani turned up pregnant again. At first Zathris feared that it might be the spawn of the man who had kidnapped her, but after the little girl was born with a birthmark shaped just like Zathris', there was no denying her parentage. Nimilee soon became a delight and joy to her father's life.

Deceased Family:
Rediza, his mother, died at the age of forty.

Anil, Runner: aged 7, born m5 d25
Black as night with no other markings, this stallion is the epitome of strength and speed. He is spirited, but has bonded with Zathris after time working with him. There are few people who can ride him.