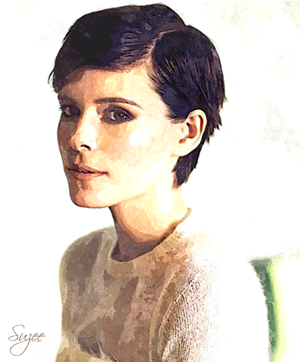 Physical Description of Persona:
Dark brown eyed, standing at 5"1", and very slender, Aviday doesn't look as old as she is, a fact that completely frustrates her. At 15 turns, she looks as though she is younger; her curves are slender and while she has developed a more womanly shape, she still thinks that she looks flat. It also doesn't help that her mother keeps her thick brown hair cut short and it tends to stick up in a ruff right along the center of her head. With her upturned nose, high cheekbones, a slender jaw, and clothes that are usually in some sort of disrepair because of her own carelessness and active nature, most people do assume that she's a boy at first meeting if she doesn't wear tight clothing. She's usually quick to inform them that she's certainly not.

Emotional Description of Persona:
Aviday is hyperactive, spunky, and has little filter between her brain and mouth which has caused embarrassment for her in the past. She is extremely sensitive about her size and lack of curvy womanly attributes. It's the one thing about her that she lacks confidence in.

Aviday is rarely seen holding still even while sitting and sleeping. She fidgets almost constantly and it is difficult to hold her attention for long periods of time. She also tends to over think situations, a fact which drives her dragon to distraction, and if something is uncomfortable or difficult to her mentally or emotionally, she tries to avoid it, ignore it, or forget it until she can't or it's forced on her to deal with. By that time, it's usually worse than if she'd dealt with it to begin with.

History of Persona:
Born the child of a regular flight moth and drudge at Riverbluff Weyr, Aviday knows that her father is most likely a dragonrider, but she's never been able to figure out who, nor has her mother. It doesn't bother her too greatly, for she is hardly the only weyrbrat who has found themselves wondering. Her connection to her mother is also tenuous at best; her mother is often too busy with her latest bedmate, focusing on her daughter only enough to make sure she is fed, groomed, and healthy. The creche raised Aviday, and so while she sometimes wishes her mother would show more interest, she has never lacked in someone she could go to if needed.

After the destruction of Riverbluff, Aviday and her mother decided to go to the more hospitable climate of Dolphins Cove. Having never chosen a craft, Aviday mostly helped out in the creche, but she secretly dreamed that one day she'd find herself riding a dragon like her unknown father. Upon her arrival and hoping that a dragon might find her on the Sands, Aviday petitioned the Weyrwoman to Stand as a Candidate.

She Impressed green Kobeth at the age of 14. It was also then that she met her father, D'ale of Dragonsfall Weyr. He immediately accepted her and they have since developed a close relationship.

Dragon's Name: Kobeth
Dragon's Age: 1
Dragon's Colour: Green
Next Mating Flight: m1 d28
Description of Dragon:
Kobeth is a light grass-green dragon that tends towards being lean even as a hatchling. Her tail and neck is a bit longer than average and her features not as delicate as her peers, making her appear gawky. She is naturally exuberant and has a sweet and loving personality.