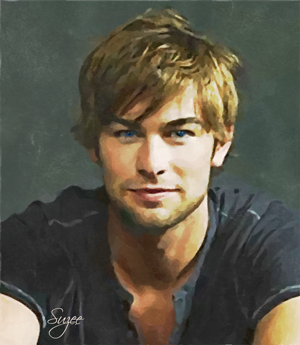 Physical Description of Persona:
Tall like his father, Kendale is well muscled and strong through his craft as a smith. His coal black hair is from his mothers side but his eyes are a light golden brown and have been known to melt hearts when directed with a purpose. His skin is naturally light colored but he is very lucky as he tans rather than burns. In summer he'll sometimes get lighter streaks in his hair if he spends a great deal of time outside.

Emotional Description of Persona:
Kendale is closer to his foster mother and younger brother Zadayle than anyone else. Studious as a youngster he is sometimes quite introspective. He went through the usual teen angst and rejected the dragonrider life for awhile before realizing it truly was his calling. He is sometimes given to rage but seems to be able to control most of it by pounding steel 'tho occasionally a hard head will do.

History of Persona:
The son of two friendly riders Kendale was the result of a dragonflight. D'ale and Kenza were good friends beyond the bed they occasionally shared. He was fostered at a young age as were most children of dragon riders. He had quite a happy childhood with his foster mother and siblings. His mother was driven and a bit wild when he was young and he didn't see a great deal of her. He became much closer to his father who spent time with him when his duties didn't occupy his time.

He'd always wanted to Stand but he also wanted to smith so he didn't take advantage of his right immediately. By the time he'd come back around to the idea, Thread had come and his mother was one of it's first victims. Her near fatal scoring in the first fall was hard to deal with though it was his older sister who bore the brunt of her care during her extensive recovery.

His father had transferred to River Bluff and wasn't there when it happened. Kendale had a typical 15 turn olds reaction. 'Denial' yet he knew the same thing could and would happen to others around them. When his father did return to Dragonsfall Kendale simply stayed out of his way.

Kendale has worked hard at his craft but his heart kept being pulled at each hatching and he found himself lurking in the stands and watching the joyful faces of the lucky candidates. Finally he found his time running out and he couldn't deny it any longer. In his heart of hearts he wanted to be a dragon rider and fight the menace of Thread.

Dragon's Name: Imalkyth
Dragon's Age: 5
Dragon's Colour: Brown
Description of Dragon:
Out of Gold Genith by Bronze Nirreth, Imalkyth is a medium pecan brown. His legs and tail shade darker toward a deep klah color. He has grown into a beautifully proportioned and solid brown. His wingspread is impressive for his size even though his body isn't especially large.

He is phlegmatic, steady and serious about life though he has a playful sense of humor directly mostly at his rider at this young age. He is protective and loving toward his rider and would do most anything to please him.