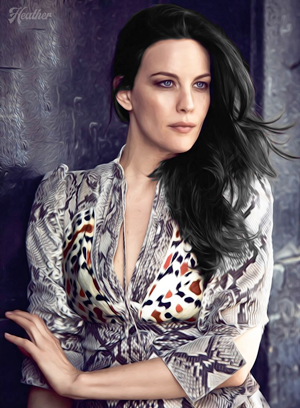 Physical Description of Persona:
Saibra is tall and slender, with curves packed in all of the right places thanks to childbirth. Her face is oval in shape, and nestled into a ripple of black hair that falls just beneath her shoulders. Her skin is naturally creamy in complexion, and freckles when she spends time out in the sun. She has a short, pert nose that is set between two bright blue eyes. Her lips could be described as "pouty" with their slightly down-turned nature but when turned up into a smile the hint of dimples appear.

Emotional Description of Persona:
Overall the goldrider could be described as 'hard to read.' She keeps her emotions played close to her chest and rarely lets what she is feeling show on her face. Most of the time people see a pleasant smile or a witty sense of humor, even if that is not what is on the inside.

Hidebound, nearly to a fault, Saibra loves rules, and believes that they should be upheld. However, she is not as strict when it comes to social rules and etiquette. She is extremely sarcastic in general, and possesses a very dry sense of humor. The goldrider has never been accused of laziness, and while she doesn't make friends as easily as some, she is very loyal to those that she has.

History of Persona:
Saibra grew up a weyrbrat at Far Island Weyr daughter of some greenrider and brownrider that she never met. Not that it mattered to Saibra, she had all of the family she needed in the pack of weyrbrats that she ran around with as a kid. Her foster mother, Tulia, was the closest thing to a "real" mother that Saibra ever had. Saibra was nothing short of a wild child growing up, she broke curfew if at all possible, hung out with boys that were too old, and often sassed Tulia if she had the chance. It wasn't that Saibra didn't love Tulia, she did, she just had not learned yet to appreciate her foster mother.

When Saibra was fifteen she decided to Stand, not because she had any real thoughts of Impressing a dragon, but because her current teen crush was also Standing. When Saibra went to Tulia to tell her that she was Standing, her foster mother "harrumphed!" There was nothing Tulia could do to stop Saibra from Standing, since she was Weyrbred, but Tulia doubted Saibra's maturity and sincerity in the matter.

Still, as with the rest of her arguments with Tulia, Saibra got her way and found herself Standing on the Hatching Sands at Far Island's next hatching. It wasn't until a clumsy blue dragonet severely maimed a fellow Candidate that Saibra understood the full impact of being a Candidate. She had never imagined that a "baby" dragon could _kill_ some one.

While the Weyrling staff was busy helping the injured Candidate from the Sands, Saibra found herself staring into the rainbow eyes of gold Chioneth. From that moment forward, as the cliche went, Saibra's life changed forever. The responsibility of what a gold dragon meant matured Saibra more than anything could have.

At age 20 Saibra had her first child, Saidrene, with an infuriatingly arrogant brownrider named K'fel. The man thought far too highly of himself,and yet Saibra felt herself inexplicably drawn to the man who was 10 Turns her senior. To the surprise of many, the once wild Saibra settled into having a child and weyrmate with no trouble. And to Saibra's surprise, she found that she enjoyed being someone's weyrmate and mother.

Five Turns later Saibra and K'fel would be blessed with another child, this one a male and a spitting image of his father. Kaibren was his father's pride and joy, and K'fel talked constantly of how great a dragonrider "his" son would make. The little family lived rather normal lives at Ista Weyr, with Saibra working under the Senior Weyrwoman and her Second as the next oldest goldrider. K'fel worked as the Weyrlingmaster's Second, and when they weren't busy they kept Saidrene and Kaibren close.

Only three Turns after Kaibren's birth, Thread once again began to fall. As with the beginning of any new Pass, casualties were high and life at the Weyr was no longer the peaceful, simple life that they had known. K'fel, at nearly forty Turns of age, was very much in his prime and so when Thread began to fall again he left his position as Weyrlingmaster's Second, out of necessity, to join the fighting wings.

One day K'fel did not come back from Threadfall, and the eight Turn relationship that Saibra had come to treasure, was gone. K'fel left behind a three Turn old son and an eight Turn old daughter. After K'fel's death, Saibra felt it even more important to spend as much time with her children as possible.

Over the next seven Turns, Saibra really threw herself into being a mother, and a goldrider. She has not pursued a romantic relationship since K'fel's death. When the opportunity to move to Dolphin Cove became available she gladly packed up Saidrene and Kaibren and moved South, eager for the responsibilities that being the Weyrwoman's Second would bring.

Saibra worked hard during her months as Weyrwoman's Second at Dolphin Cove and it paid off. When Hygalia left Dragonsfall it was Saibra from Dolphin Cove who was considered for the position and who left to become the Senior Weyrwoman of Dragonsfall Weyr.

A Turn or so into her time as Dragonsfall's Weyrwoman, Saibra's relationship with bronzerider R'enh became something deeper when they realized she was pregnant. After Saibra lost the baby the two decided to actively pursue a more committed relationship and try for another child. R'enh moved to Dragonsfall to be with Saibra and in month 5 of Turn 9, Saibra delivered twins, a girl, Brenha, and a boy, Saihen.

Dragon's Name: Chioneth
Dragon's Age: 24
Dragon's Colour: Gold
Description of Dragon:
Chioneth is a very light shade of gold, nearly jasmine in her hue. She's average in size for a queen, with a sleek muscle build, and a long graceful neck. Her head is arrow in shape, with a short snout and accentuated eyeridges. Chioneth is just as serious, if not more so than her rider, the two even share the same dry sense of humor.