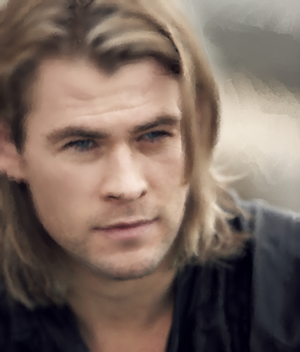 Physical Description of Persona:
6'0 even, Reven has a square set of shoulders, corded in muscle. His chest, as well, is a toned washboard that leads down to a trim waist and long legs. His hair is a dark blonde, kept smoothed back against his head and out of his clear, blue eyes. Reven normally keeps a couple of days worth of scruff for a beard, only shaving when it starts to get itchy.

Emotional Description of Persona:
Reven isn't a shy man and would be described as extremely confident, maybe sometimes overly so. He always knows what he wants and he likes to get his way, even at the cost of others feelings. This makes Reven a good business man, and sometimes not always the easiest person to deal with. To his friends and family, they know a deeper side of Reven, and they understand his dry sense of humor and sometimes overbearing tendencies. He wants to take care of those he loves, and he hates showing any signs of weakness.

History of Persona:
Even though Reven was the first born child of Rendrall and Corette he was barely ever around. His cousin, Namiren, was the sole heir of Green Valley, and so there was no real reason for Reven to hang around the Hold. At a young age the boy was fostered to the neighboring Red Rush. Reven rarely came home to Green Valley, only for special occasions such as weddings and birthingdays. Truth be told, as long as Namiren was soaking up the lime light of being the Hold's Heir, Reven was more than happy working shoulder-to-shoulder with the people of Red Rush learning to farm. There was a natural serenity to working with the land, and Reven enjoyed it immensely. Most people in the Hold completely forgot that Rendrall and Corette even had another child, assuming that the three that they saw most often were the only ones.

When Namiren perished unexpectedly the Hold was left without an heir, and the next in line dropped to Reven. At first, Reven didn't want to return to Green Valley, he'd found love with a girl at Red Rush and the people there were more like his family than the people at Green Valley. It was with the urging of his mother and father that he finally agreed to become the holder of Green Valley. Once in the position, Reven was encouraged, at the best of Lord Corowal, to find a wife, and he did so in the lovely Arippa.

Ghrey, Runner: aged 8, born m3 d5
Ghrey is a large grey stallion with slick, shiny fur that is tinged with a dark blue hue. His mane and tail are a stark white, and the stockings of his leg are white as well.