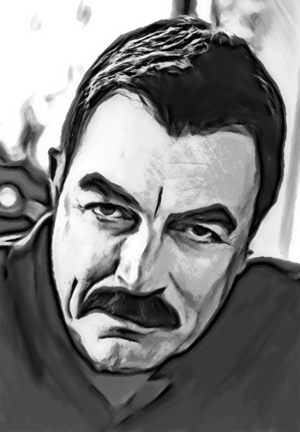 Physical Description of Persona:
Y'gel is large and strongly muscled. Tall at 6'3", he weighs in at 250 pounds. Broad shoulders and a barrel chest slope to a narrow waist and hips. Powerful legs support his frame and allow him to lift heavy weights, this aids him greatly in his chosen profession of Dragonhealer. Moving injured dragons parts can require muscle even with the cooperation of multiple assistants and both the dragon and rider.

His thick ash colored hair is worn cropped close to his head. It tends to get unruly and stick out in all directions if he allows it to grow. He has seriously contemplated shaving it all off. His pride and joy is a large mustache which he keeps neatly trimmed above an equally neat goatee. His skin is a medium shade that tans easily and his good humor has carved laugh lines around his mouth and eyes. He enjoys the climate of River Bluff Weyr and spends time in the sun and at various sports when not occupied by the needs of his craft or lifemate.

Emotional Description of Persona:
Good humored almost to the point of being jolly, Ygel sees the positive side in most situations. His compassion for his patients is blended with the encouragement he exudes as easily as he breathes. Both the riders and dragons he heals are always certain of his good intent for their wellbeing once they get past the initial injury and they are able to think again.

Happy as he is, he works hard and diligently and expects the same from his army of healers and assistants.

History of Persona:
The son of a healer he was raised at Jade Harbor by his parents. His father a Master Healer was supportive when his son chose to follow him into the profession. He spent his early years studying intently until with some surprise he discovered women. He was again surprised by his change in status when as a Junior Journeyman he was sent to Riverbluff Weyr where he was searched and Impressed. Long before Thread first fell he picked up his craft again after he and his lifemate finished their weyrling training.

An early training injury to his lifemate changed his path forever and Ygel became obsessed with dragonhealing. Progressing steadily over the years through Journeyman and then finally Master. His skills were never tested so dramatically than that first Threadfall. He still sees the aftermath of that fateful day in his personal nightmare and swears he will never again be caught so unprepared.

Dragon's Name: Aughashyth
Dragon's Age: 34
Dragon's Colour: Bronze
Description of Dragon:
Aughashyth is a deep bronze with darker coloration along his sail edges. At an early age he was injured in a training accident when he was flamed on his right wing. The sail has grown back and most of the scaring is now invisible but a portion of it is pulled at a strange angle. He compensates for the difference in lift when flying. But, while he can chase green and does so with alacrity, his gold chases have left him consistently at the back of the pack though not for lack of effort.

He is as good natured as his rider and has deftly caught many an injured pair as theyve fallen from the sky during Threadfall.