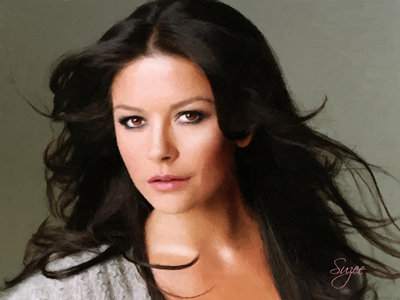 Physical Description of Persona:
It would not be a lie to call Briata beautiful. Hair as dark as night cascades in waves down her back to mid thigh when it is let loose. Every day, she puts back her hair. Sometimes it is in one or more braids, sometimes in a bun or an elegant twist. She makes sure to take care of it - it is her one vanity.

The darkness of her hair brings out the startling hue of her large, almond eyes - eyes as green as well aged jade and flanked by thick, dark eyelashes. Her nose is delicate, her lips full and naturally pink. Her skin is fair and free of freckle or blemish.

She is tall for a woman, reaching five feet, nine inches in height. Her perfect posture helps her to make her look taller than she truly is and her curves are from a man's dream of perfection. Her limbs are long, her fingers slender, and she moves with the grace of a trained dancer.

Emotional Description of Persona:
Gentle and empathic, Briata is a caretaker. She adores children and loves to be with them. She enjoys taking care of others, often helping when there are sick to be tended. She likes to please and doesn't like to see people angry or sad. Such unpleasantness affects her more than it does most and she will sometimes even cry over someone's anguish even if it doesn't affect her.

Briata considers herself to be very responsible and she gets annoyed when people shirk their responsibilities. She will often come behind and try to make up for their mistakes or inattention. She prefers the discipline of a lecture to that of a spanking and tries to reason with others in regards to their mistakes.

Briata has a tendency to put others before her. This can lead to trouble as she will neglect her needs to tend to the needs of others. Sometimes, she tries to take care of things and of others even when they don't need to be taken care of.

Despite that, she does have a childlike side of her. Briata enjoys going outdoors and playing with children. Sometimes she loves to just gaze at the stars, or collect flowers and make flower chains.

She enjoys sewing quite a bit. Her mother taught her how to make clothes and she learned how to embroider from a weaver who had taken up post at the hold. Embroidery often found its way into her clothing, particular her nicer things. When she feels like she needs to think or to relax, she will sit down and either draw a new pattern or actually embroider.

History of Persona:
Briata is the third oldest of seven children and the only female. Her two older brothers were seven and eight by the time she was born, and her last three siblings were born several turns after she was. Her father, Bridinar, was born in the north to a Holder. Being the youngest of four sons, he moved South to start his own hold under Garnet Valley's domain. It was there he met and married his wife, Atalna. Atalna bore him four sons before Briata, two who were stillborn. Her labour and delivery with Briata was hard and it was another five turns before she was able to conceive and give birth again, though she did so three more times.

Having been born and raised in the north, Bridinar had a more lenient view of women. He knows they are intelligent and just as capable as men. He has encouraged his wife in any pursuits that she would like to do, though he knows there are limitations to what she could do in the South.

There were many times when she was younger that Briata heard voices inside her head. She learned quickly not to say anything to anyone for it seemed to worry them and there were a couple of occasions she was taken to the healer because of this. As she grew older, she realised that these voices were not of her imagination, but of dragons. She could hear them during threadfall, and whenever a dragonrider relative of someone in the hold visited. She would often converse with the dragon, taking great pleasure in her little secret.

A turn after her youngest brother, Talbrid, was born, Atalna grew sick. The healers were flummoxed as to what was wrong, and eventually she died without any diagnosis being made. The entire family grieved. Briata was ten at the time and took over the caring of her family, feeling that it was her duty. She took over as her mother, working with the headwoman to take care of family and hold.

When Briata was twelve, Bridinar met Wenina while on a trip to Garnet Valley. Visitations occurred on both sides and a turn later, they were married. Briata was wary at first of this new woman who was to take the place of mother, but Wenina was kind and soon she and Briata became good friends. Briata was even able to eventually call her mother.

Bridinar encouraged Briata to do what she wanted. He even offered to let her go to the North to become a crafter, but Briata refused. She found her joy and her purpose in life doing what she had been doing - taking care of her family. All she eventually wanted to do was to get married and raise a family. That would be her craft.

Despite her beauty, Briata found herself lacking in suitable suitors. She has since asked her father to take her with him when he visits Garnet Valley in hopes that she will meet her future husband. She often thinks about who that might be and has a rather romanticised idea of what married life will be like - which could be a recipe for disaster.

That is, unfortunately, exactly what happened. Briata brefriended Ishek and married him after he proposed. The marriage, while friendly, was not a happy one and Ishek seemed loathe to consummate it. When Briata found out that he was consorting with a dragonrider from the Weyr, she decided to leave because of his adultery. Her friend T'vanen took her to the Weyr at her request and there she resides, trying to mend her heart and figure out what to do with herself.

Jewel, Gold Firelizard: aged 5, hatched m2 d12
Next Mating Flight: m11 d25
Jewel is on the small side for a gold. Her hide is of a medium hue with hints of red, like a golden sunset. Her tail seems longer than normal for a firelizard, but it only adds to her delicate beauty. Being young, she is quite curious, but doesn't venture too far from her owner.