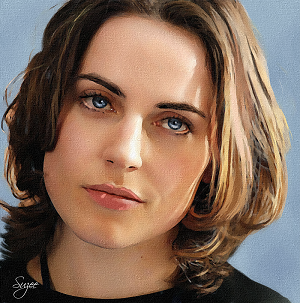 Physical Description of Persona:
Jayzine is graced with good looks that comes from natural gifts rather than any active participation on her part. In fact, the deliberate beauty that Jayzine cultivated as a young woman has long since given way to a total lack of regard for how she looks. Her curly brown hair tends to be cut before it can reach her chin, and is often covered with a kerchief. Her blue eyes betray her every thought and emotion, no matter how hard she tries to hide them behind lowered lashes.

Although Jayzine brought some of her finer clothing with her when she left the Vintner Hall, these days she finds herself wearing plainer stock. Her common choices are blues that flatter her eyes, and she is good at picking out outfits that flatter a figure that is plenty curvy after three children.

Emotional Description of Persona:
Once an open and caring young girl, Jayzine has developed a hard exterior and pretends to not care that people think ill of her. In fact, she is so determined to not care about other people disliking her that she has yet to notice that few people in the Weyr actually do. If anything, Jayzine's rarely seen sense of humor and ability to care for others would make her well liked if she didn't constantly feel the need to defend herself against imagined slights.

In her determination to ignore other people, Jayzine has made a habit of not speaking about the events that brought her to the Weyr. Many people--her daughters and former husband included--think they know the whole story. Jayzine has no intention of explaining herself to anyone, which has made her more than a little short tempered when she subject comes up.

History of Persona:
Jayzine was born at the main Vintner Hall, the daughter of a master vintner. Her mother died giving birth to her, leaving her in the caring--if clueless--hands of an often distracted father. Her father, Zintal, was immensely proud of his beautiful young daughter, but wasn't exactly sure how to relate to her. Her upbringing was mostly left in the hands of some of the ladies of the Hall.

When Jayzine was sixteen, she developed a rather strong attachment to a local holder quite a few turns her senior. The fact that he returned the feelings would not have been considered such a bad thing if the holder in question hadn't been married for eight turns already. Things were starting to progress past a few innocent kisses when Zintal caught them. He decided to pack himself and his daughter off to Amethyst Cliff's Vintner Hall within the sevenday.

Things proceeded to go from bad to worse upon their arrival, when her father met a journeyman who seemed to be destined for important things. Hardly a month had passed before Jayzine had been promised to Fielton, though Zintal was kind enough to give Jayzine a turn or two to grow up--and to grow used to the idea.

Jayzine didn't, and after a fumbling wedding night with her thoughtless new husband who seemed to care less about her than he did about owning her, she settled in to make him as miserable as she possible could. The more Fielton ignored or mistreated her, the harder she tried to make him unhappy. Even the birth of their two children did little to soothe her dislike, though it did give her something to do other than torment him.

Tales guessing the origin of Jayzine's third child and the reason she left him behind at the Hall have become the stuff legend at the Vintner Hall, but the truth was ugly and unromantic. A playful flirtation she'd been carrying on with an older journeyman turned deadly serious while her husband was away. Whether or not she'd intended it--or even wanted it--seemed to be an academic question. Her husband would hear no explanations, and Jayzine was virtually shunned by the Hall for her indiscretion.

Escaping to the Weyr was a last-ditch attempt to regain some sort of life for herself. Her last connection to her old life shattered when both of her children left her to return to their father, leaving Jayzine alone, bitter, and determined to forget everything that came before.

Her life took a positive turn when she got to the Weyr. She worked hard there and rose steadily to become the Headwoman and reporting directly to the Weyrwoman. Over time she developed new friendships there and her children came for a visit and decided to stay. Then tragedy struck and the Weyr was destroyed. She and her children survived by moving to Emerald Falls Hold for a time.

When Barrier Lake Weyrhold opened, she was invited by Lord Weyrholder K'ran to come and help organize the efforts of the staff during its construction. She accepted and began the most fulfilling time of her life.