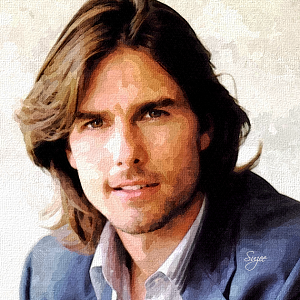 Physical Description of Persona:
K'ran would be called tall, dark, and handsome... if he was only tall. He's shorter than the average Pernese man and stands closer in height to a short woman, so many do not take him seriously at first glance. He's built like a dragonrider, compact and sturdy muscle.

He has a face that's got strong cheekbones and a broad smile. His eyes are a very dark shade of green, and they seem older than their years, as a series of life changes has worn him down. His hair is a rich chestnut brown, trimmed to just above his eyebrows. Locks fall round the ears, and his hair tapers at the back.

Emotional Description of Persona:
K'ran is intelligent and has an excellent memory for details. He's good at hyper-focusing on tasks that needs to get done. He is very reliable and very responsible, traits which usually endear him to others. He cares about the people whose lives he is entrusted with, and tends to feel guilty and blame himself if someone is injured or killed. He is principled, speaking up when he sees an injustice, and seethes when he can't do anything about it.

K'ran's leadership style is to be very approachable and personable. He always tries his best to put people at ease, to build a rapport with his wingmates, and encourage people whenever he can. Criticism from him is rare and praise is abundant. However, while he's good at being professionally approachable, and is good at making close friends, there's one area where he's weak. Interacting with women who are romantically interested in him or vice versa is difficult for him and he can stutter.

K'ran loves to travel, has a secret packrat impulse, and has at least one memento of every location he's ever been. K'ran also writes journals, and has a log of his entire life. He keeps those well-protected; they mean a lot to him. As a side effect of his wanderlust, he has never minded being transferred from Weyr to Weyr as is needed. He accepts rank when given to him and treats it as a precious obligation, but he's never felt driving ambition like many other bronzeriders describe.

History of Persona:
Kheiran and his twin, Corran, were born out of wedlock and given to their mother's sister to raise at a cothold of under 20 people. Despite having very different personalities, the boys were incredibly close. When they turned twelve, they both become guards of different types. Corran valued stability and apprenticed to the Hold Guards of Amethyst Cliff. Kheiran became a traveling guard with a caravan. When he was 17 and in Far Island Weyr territory, he was Searched by a large blue dragon. The dragon's rider informed him that he had been searched - did he want to go to Far Island and Stand?

Weyrlife was quite a shock to Kheiran, the sexual liberation somewhat confusing and a little alienating. He did not throw himself into the new freedoms, focusing instead on Candidate studies. His Impression was dramatic. One egg partially cracked, and the dragon inside got its head and legs out, able to make eye contact and Impress, but the rest of the shell wouldn't come off. It was after he freed his lifemate he realized he'd Impressed a bronze.

They had a somewhat difficult weyrlinghood as there were concerns about Rogueth's health and K'ran's size, but they did fantastic academically. He graduated later than his class and was a Weyrlingmaster's Assistant for some time. When Northern Weyrs began to open up, he transferred to Ista, hoping it would help. When Thread started to fall, he proved a good tactician, creating his own strategies but his Wingleader stole the ideas and took credit for them.

In Turn 2 of the Pass, he requested a transfer away to Dragonsfall, hoping that being near his family would make his life easier. Then when Dolphin Cove Weyr needed experienced adult riders after a hurricane, he volunteered to help out. But several Turns later, once that Weyr had replenished its strength, he returned to Dragonsfall and his family and eventually became a Wingleader there, his first taste of rank.

K'ran was volunteering assistance to the River Bluff Weyr territory when gold Orlaith rose for her flight. Rogueth chased, as bronzes do, and won. K'ran had to move to a new Weyr and learn to adjust to increased responsibilities at a new place, where few trusted the outside bronzerider. With the destruction of River Bluff Weyr, K'ran lost his Weyrleadership in a rather un-traditional manner, and it's haunted him ever since.

He then moved to Dolphin Cove Weyr leading a wing largely comprised of former River Bluff riders, trying to help them assimilate to their new home as best he can. Now that the new Weyrhold is re-opening in the former River Bluff territory, K'ran sees a chance to build anew and erase his failure.

Dragon's Name: Rogueth
Dragon's Age: 20
Dragon's Colour: Bronze
Description of Dragon:
Rogueth is quite small for a bronze dragon, and it's quite possible that there exists browns larger then him. His conformation is slender rather than stocky, reminiscent of a smaller green or blue sibling in silhouette. His color is a rich reddish bronze.

Rogueth is a dragon with a large amount of energy and curiosity. He particularly loves to fish. He's fairly talkative both to his rider and other dragons. He's very flirtatious with the golds and greens, like many bronzes, and is wholly unconcerned with his rider's discomfort with flights and romance. He's also very ambitious and prideful, unlike his rider.