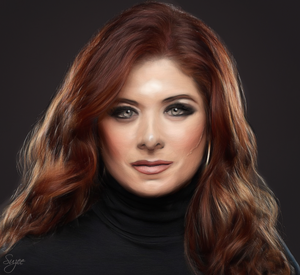 Physical Description of Persona:
Ciara stands at 5'6" and weighs about 129 lbs. Even after years of being a dragonrider and having borne several children, she still has an almost girlishly slender figure. The most prominent feature in her narrow face is her bright, light-gray eyes that always seem to reflect what she's feeling. A thin, silvery scar that she received from an errant strand of Thread curves around her left cheek bone, and it is clearly noticeable against her darkly-tanned skin. Ciara wears the waves of her dark red hair in a tight, long braid - a style which is almost too severe for her - but she only does it so that she can attempt to tame the unruly mass!

Emotional Description of Persona:
Ciara is a perceptive, normally calm and soft-spoken young woman. She does have a slow yet hot temper - but it takes a lot to happen for her to actually let it flare. Ciara lives life as it happens, holding the belief that everything happens for a reason. She has never been known to dwell incessantly on anything, and so by nature, she has always been optimistic. People sometimes seem to gravitate towards Ciara when they just want to talk or to let something out that has been building up inside of them, and she listens with an attentive, open ear and an understanding heart. She is always willing to be a comfort to anyone and will never hesitate to put her arms around someone and provide a shoulder to cry on.

History of Persona:
Ciara was born at River Bluff Weyr and grew up under the loving care of the Weyr's foster mothers. As a child, Ciara was drawn to music of all types and she loved to sing. As she grew older, her budding voice matured with her, becoming more of a light soprano with each passing Turn.

When Ciara turned twenty, her life took a sudden, unexpected turn when green Ellianith chose her to be her lifemate. Ciara then turned all her focus and threw all her enthusiasm into weyrlinghood.

Ever since that Turn, Ciara has been whole-heartedly devoted to her dragon and the duties that come with such a responsibility that she has never really found the time to start looking for a man to have a long-term relationship with. She found a relationship with R'yin but never weyrmated with him. His obsessive ways became difficult to deal with and she moved on.

Over time she fell in love with K'sedel. She is Weyrmated with Riverbluff's long time Weyrleader and has had two children with him.

Dragon's Name: Ellianith
Dragon's Age: 24
Dragon's Colour: Green
Next Mating Flight: m3 d6
Description of Dragon:
Ellianith has a beautiful, very pale mint-green hide. Larger in size than the average green dragon, Ellianith is just as swift and as agile in the air as her smaller, more dainty sisters, and she takes a certain pride in her long wings that make it easy for her to glide when flying.