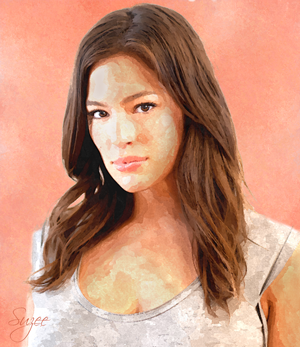 Physical Description of Persona:
Of average height, Ninaine doesn't stand out among a crowd of her peers. She is not tall, nor is she particularly pretty. Her skin is the color of lightly creamed klah, her face slightly round with a square jaw and rounded chin with a slight cleft. Her hair,a mahogany brown, is her real beauty and when not braided up, falls down her back in waves.

Ninaine is not the slender, willowy figure of a young woman that some men prefer. Instead, her figure is one of curves. She could be termed as voluptuous in both chest and hips and she does have an intriguing hour-glass figure. Since Impressing, Ninaine has lost some weight and become toned, but people around her simply haven't noticed. This could be because when finally told she had to wear the dreaded trousers instead of her skirts, Ninaine began to wear the baggiest clothing she could find.

She now wears the required trousers, but still finds them too tight. She still wears her skirts more often than not, but also wears large tunics with leggings. She doesn't like wearing any sort of snug or revealing clothing if she doesn't have to.

Emotional Description of Persona:
Ninaine was raised to be a proper young woman and it is to that she holds. She walks straight, has good posture and above all keeps to proper behavior. She's prim, well mannered and keeps any temper she might have tightly under wrap...or at least she did until she Impressed. After completing Weyrlinghood and fully bonding with Luneth, Ninaine struggled to keep her emotions in check. Now she's trying to regain that composure, but is finding it very difficult.

Raised to be prim and proper behavior to the point of prudishness, she hasn't adapted well to the looser strictures of behavior in weyrlife. Unable to completely abide by the concepts of absolute obedience to hold mores has left her rigid black and white concepts of what is right and wrong crumbling. Friendships have been difficult to form because Ninaine still struggles with propriety and hold-based gender roles. She's prickly, easily offended, and often frustrated, something that's gotten harder to hide despite two turns of living at the Weyr. She's yet to find a balance that will make her truly happy.

Recently, she's buried her temper and frustration with adapting to Weyrlife. In an effort to keep her life simple and uncomplicated, Ninaine has decided to not fight adjustments and efforts to reform her attitude towards what she deems right and proper. Instead, she's resolved on acceptance and dull compliance. She hides what upsets her and doesn't speak of it, bottling it up firmly.

History of Persona:
Ninaine was raised at Amber Hills Hold by a strict mother and a Harper father. The eldest of several children, It was from her mother that the proper behavior of a young hold lady was drilled into her, but her father gifted her his love of the written word. Her mother demanded obedience and adherence to strict morals, and Ninaine believed and followed those guidelines without question. Any of her own personal desires were put aside in the face of the duty to her family.

Ninaine did not have many friends at Amber Hills hold. In truth, many of them did not like her because she often seemed to be too perfect, too prim, too proper. Most believed that her distance equated to belief that she was better than they were. Simply not true, but she didn't try to befriend them after they pulled away.

At the age of fifteen, she was Searched and there was a gold egg on the Stands. Her mother, wanting her to marry, had wanted her to refuse the Search, but her father had overridden her mother's wishes and instead of being bound to the Hold, she was allowed to travel to the Weyr in the hopes that she might Impress that gold and bring distinction to her family.

When she Impressed green Luneth, her parents reacted poorly, disowning her and berating her publicly. When that caused her to momentarily doubt her bond with Luneth, it caused her little green to become extremely possessive and clingy, making it difficult for Ninaine. Further, adapting to Weyr culture has been very difficult for her; she tried clinging to her Hold morals, but that only made things harder.

Ninaine had difficulty trying to find herself when she had to adjust and change. She wasn't exactly sure who she was who she was supposed to be. Her relationship with N'call helped her grow into into a more confident person and she became more understanding of weyr life in general.

Just when she had finally gotten settled in her life, Ninaine and Luneth were badly injured in Threadfall. Luneth's wing was broken near the main joint, and it was questionable if she'd ever be able to fly more than short distances. Determined to be of some use and without a Craft, Ninaine requested to join the weyrling staff. It was her hope that she could help others like her adjust to Weyrlife without the complications she had experienced.

Ninaine and N'call's weyrmating was strained when he was sent to Barrier Lake with the goldrider, Teseada. Ninaine was pregnant at the time with twins and she was faced with going through the end of her risky pregnancy mostly alone. N'call visited as often as he could, but it didn't stop Ninaine's feelings of abandonment. Because she was technically a retired rider without a craft, Barrier Lake's Weyrleadership did not immediately approve Ninaine transferring to the new Weyrhold until she could prove that she could contribute. N'call and Ninaine were separated for seven months, N'call living with Teseada while Ninaine remained at Dragonsfall. Ninaine still struggles with jealousy about the situation, despite her friendship with the goldrider and Teseada's efforts to get Ninaine transferred.

Her transfer was finally approved and Ninaine moved to Barrier Lake with her three children. Ninaine was placed in the Headwoman's staff to utilize her her training in both Hold and Weyr.

Dragon's Name: Luneth
Dragon's Age: 3
Dragon's Colour: Green
Next Mating Flight: m3 d15
Description of Dragon:
Luneth is a dark forest green that fades to a lighter leaf green along her muzzle, wingtips, feet and tail. Like her rider, she is no delicate beauty, but instead is built for function. She is solid and has a heavier frame; when she fully matures her musculature will be more pronounced than her sleeker, more delicate peers.

Little emotional Luneth is going to be a difficult to handle green for all involved. Ninaine's momentary doubt of their bond shortly after hatching has imprinted on Luneth the overriding need to make sure that nothing and no one intrude upon it. She is fiercely protective and possessive of her lifemate, to the point that even touching Ninaine at the wrong time will send Luneth into a possessive flurry of trying to drive the interloper away. She has not yet attempted to connect with other dragons as her main focus is her bond with Ninaine and little else.

Luneth settled as she grew, but it took constant vigilence by her rider and others. Now calmer, but still protective, her wing injury prevents extended flights.