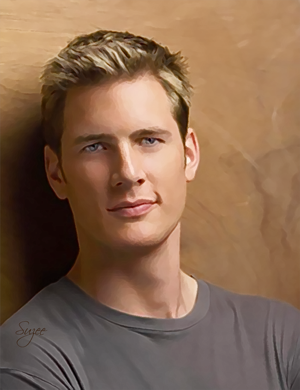 Physical Description of Persona:
Garion is taller than most men around him at over 63. He is very active and fit with lean muscle mass and a narrow waist. His blue eyes, dark blond hair, symmetrical features, and a square jaw make the whole package classically handsome.

Emotional Description of Persona:
Garion is even tempered and calm in a crisis. This makes him very good at emergency medicine. But he's learned over the turns that most people dont look beyond his blond good looks and healer skills so he rarely lets them close. He does enjoy feminine company but never stays interested in one woman for any length of time.

History of Persona:
He was born into a prominent family at the Healer Hall and followed the same path as his father and Uncles. He knew from the beginning that healing was what he wanted to do. When he rose to Journeyman, he decided hed rather be out in the world than stuck at the Hall so didnt choose a specialization and became a generalist. He traveled for a time between both Hold and Weyr so he is very comfortable in both places. He was finally assigned to Sunstone Seahold before it became a major hold. At that time he used his skills as needed for the benefit of the hold and learned to look the other way if things werent exactly on the up and up. Hes been very well rewarded for keeping his own council and loyalty to the Hold Leadership.