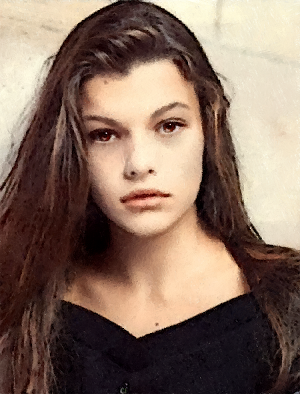 Physical Description of Persona:
If Enamra hadn't been malnourished most of her life, she'd be longer of limb and stronger. As it is, she is delicate and small boned, remaining far too slim than she really needs to be. Her brown hair falls to her waist and is in need of a trim and typically uses it to hide her face if allowed. Her large dark eyes are brown and framed with thick, but short lashes. Her skin is the color of lightly creamed klah, with freckles that dot over the bridge of her nose and cheeks. Her bottom teeth are slightly crooked and her upper teeth appear large in comparison to a thin face and a slightly pouty lower lip.

Now with a healthier diet and after bearing a child, she's gained much needed weight, slender curves replacing the gawky, bony frame that she once had. Her face is filling out as well, no longer gaunt or sickly looking. Instead, she has a rosy glow to her cheeks and more life in her eyes. She has a delicate loveliness to her face now, but she is unaware of how pretty she actually is

Emotional Description of Persona:
Enamra is shy and a bit skittish, and usually doesn't speak over a soft tone. She doesn't raise her voice, even in her own defense. Any display of anger frightens her and she cringes. She tends to look down at all times, and doesn't meet people's gaze unless someone makes her. She used to have a tendency for naivete, but her recent history has caused her to be untrusting and having little self-worth, with a penchant for hiding and withdrawing.

Enamra is a hard worker, however, and will work until she tires if allowed; it's all she's ever known. She is unused to being idle and if forced into idleness will find something to do. She also loves the water and swims like a fish; its one of her few joys.

History of Persona:
Enamra was born in a small, poor fishing cothold and is the eldest of six children. Her mother died birthing the last, a the young son that her husband had been seeking. As the eldest, Enamra took over both the household duties and the mother figure for the younger children while her father was out fishing. They rarely had enough to eat, for her father was not a lucky fisherman and their small garden wasn't always fruitful. Dedicated to making sure that her siblings ate, Enamra would often give her share of food to them to make sure that they would go to bed with full stomachs.

When traders stopped by their cothold to weather a storm and trade for kitchen items, a young man in the caravan named Doroon gave Enamra special sweets and when her father wasn't looking, gave her attention and spoke sweetly to her. He told her that she was enchanting and lovely, something she had never been told before, and shortly after, claimed that he wanted to marry her and take her on the caravan for adventures. She was enchanted by the idea and believed her dreams of a happy future were close. When he asked her to give her innocence to him, she was convinced that he was serious about marriage. It was only the next day, when the trade caravan left without her that she realized that how foolish she had actually been.

When she began to get sick, she refused to believe that it was anything more than a simple illness. But when it continued, she knew that Doroon had left something behind, a pregnancy. Enamra was terrified and hid the pregnancy behind baggy dresses. Unfortunately, her younger sister noticed her continued illness. Concerned, the younger sister went to their father and told him the details of the sickness.

It didn't take long for Enamra's father to figure out the truth. Enraged and blaming his daughter, he disowned her and physically drove her from the cothold. Enamra is now without a home, with child, and on her own.
--
The Dolphin Hall took Enamra in and allowed her to stay. She wanted nothing to do with the child that grew within her, so upon giving birth to a little girl, gave her to Dolphins Cove Headwoman to raise. She neither looked at or held the child after its birth, but secretly hopes the baby will grow up happy. She is a drudge and hopes to repay the Hall's kindness to her by working as hard as she can.

==
Enamara was reunited with three of her siblings after her father died at sea and left the others stranded without care. Two sisters died from Firehead, but three others were recovered before they could starve and were brought to the Dolphin CraftHall. Enamra sees her little brother as much as possible but has relinquished her care of him to a much more experienced, knowledgeable, and loving full-time fostermother. When not at Harper classes, the other girls, Embly and Roblyna, stay with Enamra in the late afternoon and evenings in their own small living area provided by Jylanya.

---
After being caught in an innocent, but compromising position with Thayde, it was decided that it was best that they marry in order to salvage what reputation Enamra had left. Thayde agreed to marry her, but the first few months of their relationship was difficult; Thayde still saw her as a child despite a growing desire for her.

Eventually, they came together as a pair, but Enamra still lacks a great deal of confidence in herself. Now with Thayde being the Hallmaster, Enamra has been overwhelmed by new expectations of her.

Bolo, Brown Firelizard: aged 1, hatched m3 d18
Bolo is an average sized brown, dark shades paling to a lighter tan on his belly. He's a quiet little thing, prone to watching others rather than get into mischief of his own. He loves his pet fiercely and will often ignore others until Enamra directs him.