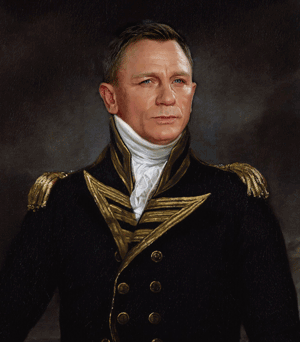 Physical Description of Persona:
Trayger is of average height. His life as a working sailor has left him with lean muscle mass and a narrow waist. His piercing blue eyes, dark blond hair, symmetrical features, and a square jaw make the whole package classically handsome.

Emotional Description of Persona:
Trayger is even tempered and calm in a crisis. This has stood him in good stead as the sea is not always kind to sailors. His brain is quick and intelligent with a rather sneaky sense of humor. He is however, aware of opportunities and willing to take chances. Hes not above a deal to make a profit either on the right or wrong side of Harper laws. However, hes very careful and only takes jobs for Bryvins benefit when he is sure of success without consequence to him or his ship.

History of Persona:
Trayger was raised as a third son on the northern continent at his fathers estate on the coast near Fort Hold. This seahold boasted a small fishing fleet and he learned to sail at an early age. This led him to apprentice as a seacrafter as there was no realistic possibility of his inheriting. He worked hard and at appropriate intervals earned promotion.

He married young to a woman of good family at his fathers hold. Theyd known each other for many turns and friendship developed as they grew to the right age. Saylis was golden haired and lovely with light complexion and fine manners. She had just told him of her early pregnancy when he had to leave on a voyage to the south.

In a case of mistaken identity, he was press-ganged when at a tavern in Turquoise Bay without his identification. Along with several others the main target was another man he later became friends with. He and Bryvin finally were taken onto another ship where Trayger was able to establish his identity at the seacrafter hall. It was then he found out about his wifes death in childbirth.

Their lives became much easier there on out but Bryvin finally left the ship while Trayger continued his rise to finally Captain a ship, receiving his Master's ticket. His ship plies the north south trade route with some side trips along both coasts.