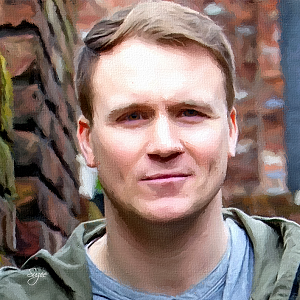 Physical Description of Persona:
His dark blond hair is usually in need of a trim, but rarely does he let it go until it can actually be described as shaggy. His eyes are light brown, with a yellowy look to them in bright lighting. He's 5'10", and though lanky and slender as a youth, has put on a bit of bulk as the turns as a rider have gone by.

Emotional Description of Persona:
Ambitious is definitely a key trait in K'reyel's personality. Before he Impressed, in the long turns where he'd begun to think it wasn't going to happen, he had set his sights on a Mastery in his chosen craft. But Erdenth's appearance on the Sands changed that ambition. Now, son of a Weyrleader, he has every intention of becoming a Weyrleader himself. Friendly but reserved in giving true friendship, K'reyel has a large group of acquaintances and very few he trusts enough to call friend. With the ladies, he's more open, but has managed to keep all his relationships very casual - and brief.

History of Persona:
Born at Thayan Peak Weyrhold to a bronzerider and his non-rider weyrmate, he had a fairly uneventful and happy childhood. At twelve, with his father's encouragement, he apprenticed to the tanner there, taking to the craft quite happily. Despite standing at every one of the rare Hatchings, he didn't Impress his Erdenth until the first large hatching at Thayan Peak. He was an adult when his mother and youngest sister died in the earthquake that destroyed the Weyrhold. Like most bronzeriders serving under S'honan at the time, he helped move the weyrfolk to a new home at Dolphin Cove.

He was transferred a turn later to thin out the genetic pool at Dolphin Cove, since his dragon was a clutchmate to one of their junior queens. Life at River Bluff was good, and he worked his way up to wingsecond there when Dream's End was reopened. He volunteered to be one of those transferred, hoping promotion there would be quicker than at what had become a very overcrowded River Bluff.

To his surprise, he found that his father had also transferred in from Dolphin Cove. When K'sedel won the Weyrleadership, he was afraid he'd be a wingsecond forever, simply because his father went out of his way to ensure no favoritism for his son. He submitted twice for transfers when new Weyrs opened, both times to have them denied by K'sedel. He even considered appealing to the Weyrwoman, but wisely refrained due to the strained relationship between the two leaders.

So he currently is still at Dream's End, and still a wingsecond. For an ambitious man, he isn't happy where he's at, but is patient enough to wait it out.

Following his father's transfer to River Bluff, K'reyel was asked to go too, as his 'second still. He was not alone in the move, accompanied by his daughter and his new weyrmate Mai, daughter of Yvonnes, the Dream's End Weyrwoman

Wanting to move on, and try to find that chance to step out from his father's shadow, K'reyel has asked for, and been granted a transfer to Dragonsfall Weyr as Wingsecond