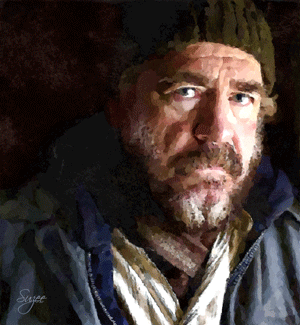 Physical Description of Persona:
Bilpen is a large man. Not overly tall at 5'9" he is wider than most men. With broad shoulders and broad belly, he is strong and can compete with metalsmiths in that area. His eyes are brown and hair though kept short was reddish in his youth. The red has almost faded from his hair but not his beard.

Bilpen has a booming voice and can be heard quite clearly from long distances away. He's also accused of having an abnormally large mouth.

Emotional Description of Persona:
Bilpen is a well adjusted and normally happy person. He does like seeing a job done correctly and to the best of one's ability. He will anger if he sees slacking or lack of effort in those around him.

He has a great sense of humor and can often be heard as his laugh booms out across the area he's in.

History of Persona:
Bilpen was raised at Woodcraft Hall and showed an early aptitude for organization and planning. As a Journeyman, his Masters began teaching him all the various portions of the craft and how to oversee and coordinated large projects. He even traveled from Hall to Hall to learn from some of the sister crafts like the Technicians and Smiths.

He has worked all over Pern both building and rebuilding areas after disasters. He was part of the Crafting team that verified the destruction of Riverbluff and their judgement the place could not be salvaged.

Married at a young age he is ever faithful to his wife who has given him several children.

Maxy, Canine: aged 8, born m9 d8
He's a large red and white longhaired canine with long ears and tail. Friendly to all he is neither protective nor territorial. However, he does point out game in the bushes by stopping and freezing stiff on point until released by his owner.