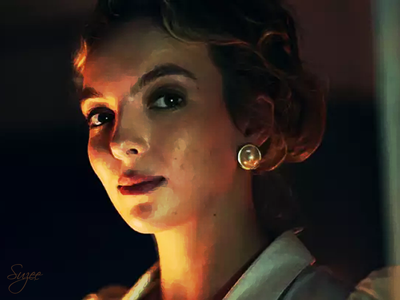 Physical Description of Persona:
Ashela is a tall, poised and attractive woman with an athletic build honed by her Turns as a dragonrider. Her glossy, golden-brown hair that just brushes her shoulders when loose, but she usually wears it pinned back to emphasise the delicate shape of her face. She has large hazel eyes and fair skin, lightly tanned by the Southern sun. She takes a great deal of care to keep her appearance immaculate when not drilling or fighting Thread, and relishes fashionable clothes, perfumes and jewellery.

Four Turns ago, she and Aglayath were scored by a stray tangle of Thread. They jumped /between/ quickly enough to save their lives, but she still bears a scar running from her right shoulder down her back to her waist, which she is reluctant to reveal in public. Although she loves to wear the latest styles from the Weaver Hall, she always insists on a high back.

Emotional Description of Persona:
As ambitious as she is ruthless, Ashela will stop at nothing to win power for herself, regardless of the consequences for the people around her. Her past life has made her very good at playing a role to get ahead, and people who don't know her well often describe her as sweet-natured and kind. Those who've had the misfortune to get in her way have a different opinion. She regards other women of her rank as rivals and judges men by their potential to be useful to her...although she occasionally has a weakness for a handsome face.

Though she has a certain degree of intelligence, guile and political astuteness, Ashela has ruined her chances in the past by overreaching. When frustrated, she is vulnerable to losing her temper and displaying her true colours. Despite her outward charm, she has few lasting friendships and has never had a long-term weyrmate or children. Her only real bond is with her gold lifemate, who she adores unconditionally. She dislikes firelizards and other pets, considering them pests, an aversion which she shares with her dragon.

History of Persona:
Due to her carefully cultivated manners and love of luxury, people often assume that Ashela was born to high rank, but this is far from the truth. She comes from a large and near-destitute cotholder family. Her father was good natured but impractical, always wasting effort and marks on far-fetched schemes, and her mother was worn out from looking after her many siblings and trying to keep the family from being turned out of their home. When Ashela was twelve she persuaded her parents to send her to the nearest Hold to work. Through a combination of determination, flattery and scheming, she worked her way up from scrubbing floors and peeling vegetables to become a personal maid to one of the Lord Holder's elderly relatives. She learned to imitate her mistress's demeanour and mannerisms well enough to fool a casual observer into believing her to be a lady.

At eighteen, she nearly managed to charm a wealthy holder into a marriage proposal, but the family of the prospective groom intervened and her ambitions were thwarted. Her actions had made her several enemies, and it seemed unlikely that she would get another chance to better her situation.

Soon after this setback, dragonriders began to visit from the recently re-opened Rising Moons Weyr. At the time, before the return of Thread, Search was seen as a way of getting rid of inconvenient young people rather than an honour and when she was identified as a possible candidate, the Headwoman gave her the choice of going to the Weyr or being demoted to kitchen drudge once again. Only a few months later, her fortunes changed when she Impressed gold Aglayath and achieved rank in her own right. She never got on well with her fellow goldriders, however, and was transferred more than once, most recently to Dream's End. When she heard about the construction of the new Weyrhold, she immediately began maneuvering to get herself assigned there, seeing her chance of becoming Weyrwoman at last.

When the first gold dragon rose at Barrier Lake, however, it was not her Aglayath but Kapera's Riyanth. Ashela made a fateful error when she hesitated to take Aglayath out of the Weyr, and only the swift actions of K'ran and his bronze Rogueth prevented the gold from attacking the other queen. Chastened, Ashela was swiftly transferred to Dragonsfall Weyr.

Dragon's Name: Aglayath
Dragon's Age: 14
Dragon's Colour: Gold
Description of Dragon:
Aglayath is a sleek and elegant dragon with a slender body and pale gold hide, shading a little darker under her belly and wings. Like many queens, she has a strong will and a high opinion of herself, but she is devoted to her rider and shares her desire to lead. Even when not close to rising, she is very possessive of her potential bronze mates, but like her rider she rarely forms attachments to one in particular, preferring to have a selection of eager suitors.