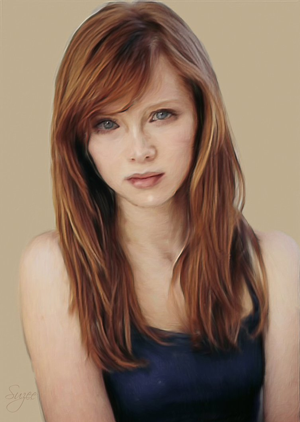 Physical Description of Persona:
At 5'7", willowy and sylph-like Lanniya maintains a look of impish delight. The roundness of youth has smoothed into adult beauty, but she has kept her wide smile that reveals dimples in her cheeks. Despite time in River Bluff Weyr and Dolphins Cove, she has remained pale; her time in the sun has just added to the smattering of freckles over her nose and cheeks. Lanniya's best physical assets are her straight strawberry blonde hair and bright blue eyes.

Emotional Description of Persona:
Simply, Lanniya loves life. Often seen as a flighty dreamer, the young woman seems to be constantly bubbly whether it involves studying or dancing to her own inner music (which happens often). Shes intelligent, but isn't as interested in any scholarly pursuits; shed much rather be outside and enjoying every moment she can. As such, it'll be difficult to get her to pay attention to matters that simply don't interest her. She'd rather be daydreaming. Often during lessons or duties she considers boring, she'll be seen with her eyes either closed or obviously unfocused; she'll be speaking to dragons or off in her own little world.

There is an air of optimistic joy and mischievous innocence around her that is often infectious. Lanniya relishes her gift, has absolutely no fear of dragons and will approach any with an eager greeting. Lanniya is also surprisingly stubborn about what she wants and it's difficult to change her mind about anything.

Lanniya has been steadily maturing under the watchful eye of both her peers and her leaders. In the face of the destruction of River Bluff Weyr and repeatedly seeing and hearing injured dragons, she is steadily losing that innocence that she once carried. She now carries some doubt about her abilities as a leader due to her age and fears that older riders do as well.

History of Persona:
One would think that Lanniya would be more sober with the tragedy that she's seen. Part of a Seacrafter family, three of her family members were lost in a violent storm when she was only ten turns old. Lanniya had not been on the ship, as she had been ill and staying with her grandparents until her family's return. Despite the loss and the grief it was her grandparents who made sure that it didn't overwhelm their only remaining grandchild. Lanniya rebounded well and though she missed them greatly, she treasured life even more.

The only worry her grandparents ever had with the child was that when taking shelter during a Threadfall, Lanniya seemed to cope by speaking to imaginary friends. Though they often wondered if the loss of her parents had cracked the child's sanity, after Threadfall was over she'd return to normal and there was no mention of the "friends" until the next Fall. They decided it was simply her response to a stressful situation and left it alone.

It wasn't until they took a trade route to the Weyr that it was discovered that her "friends" were not imaginary at all. She was almost immediately Searched and her grandparents were convinced to stay.

After learning that dragons can go /between/ times, Lanniya risked everything. Studying the land and sea charts, she plotted the path that her parent's ship may have gone and took Anaeryth back to time before her parents were lost in the storm, she found them, but not without causing Anaeryth some injuries. Because of her recklessness, the Weyr's leadership demoted her back down to work with the Weyrlings until she learned some responsibility.

Because she and River Bluff's Weyrwoman had serious personality clashes, she was sent to Dolphins Cove to complete her training. When River Bluff Weyr was destroyed, the loss shook her terribly and forced her to quickly mature. As much as she would have liked to stay at Dolphins Cove, she was transferred to Dragonsfall Weyr when there was another gold egg on the sands and there was a concern that there were too many golds at one Weyr. She didn't completely object, however. K'ale, the man she adored and had won her heart was there.

Anaeryth is well matched to her life-mate. Overall a calm natured gold, she is surprisingly sweet but already has a core of steel in her spine when stating her desires. She is instinctively well-mannered, but isn't above being stubborn or defiant if she feels she isn't getting what she needs.