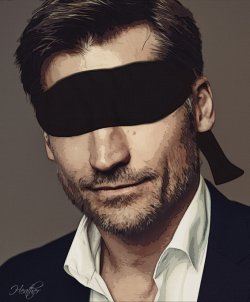 Physical Description of Persona:
R'axe is extremely good looking, and he knows it. His blonde hair is kept trimmed to the nape of his neck in the back, but his bangs are long enough to sometimes hang down into his blue eyes. He has a strong, square jawline and the hint of a cleft in his chin. Natural exposure to the weather has given him faint lines that feather gently from the corners of his eyes, but it has also earned him a nice, rugged appearance that he uses to its full advantage.

R'axe is 6'0" even and built with a solid padding of muscles across his shoulders, and a lean, sculpted torso. He doesn't have to try overly hard with his appearance to keep himself looking stunning so he generally just dresses in typical rider clothing. It is his smile and the glint in his eyes that is the most disarming of his features and generally what will make you want to talk to him.

Emotional Description of Persona:
R'axe likes to have fun, he dislikes when others don't. The man is carefree and will flit from lover to lover as long as the relationship stays "fun". He is less inclined to stick around should any drama arise or should things get "boring". In R'axe's opinion life is short and he wants to make it a thrilling ride until the end. It's because of this attitude that the word "weyrmate" or "significant other" has never even crossed his brain. In R'axe's observation weyrmates bring nothing but jealousy and drama, and he is interested in neither.

History of Persona:
R'axe grew up in a Northern Weyr to parents who were "weyrmated". All he can ever remember is his mother yelling at his father over the different women he bedded, or how he took "too long" to come home from a mating flight. These experiences left lasting impressions on the young Rayaxe as he grew up and left the Weyr for a while and apprenticed to the harpercraft.

When he became a journeyman he was sent back to the Weyr and while there went on to Impress a blue dragon named Jayth. The pair seemed meant for each other from the beginning. Jayth was far too arrogant for a blue, much like his rider, and the pair found themselves in trouble, more than once, for giving a senior rider "lip".

As R'axe aged and matured he learned to keep his arrogance and confident nature in check when around leadership, but catch him at the tavern and he'll be telling you all about himself and just how great he really is. R'axe feels no shame in bragging on himself. He can look in a mirror, he knows he's good looking, he's had plenty of pleased lovers so he knows he's good at that too, and he and Jayth were promoted to Wingthirds before they decided to transfer down to Dragonsfall. They accepted just a regular wingrider's position at Dragonsfall, but R'axe didn't mind, responsibility and leadership weren't his thing anyway.

In the 10th month of Turn 9, R'axe suffered a nearly fatal Threadfall accident that resulted in the loss of both his eyes. The bluerider is now working to figure out what kind of life a blind dragonrider can have.

Dragon's Name: Jayth
Dragon's Age: 19
Dragon's Colour: Blue
Description of Dragon:
Jayth is a sleekly muscled, elegant cerulean blue dragon. He is just as cocky and self-conceited as his rider but has never had trouble impressing the greens.

Ward, Canine: aged 2, born m2 d2
Ward is a tall, solid black canine with ears that stand on attention. He is a trained canine that specifically helps R'axe navigate around the Weyr.