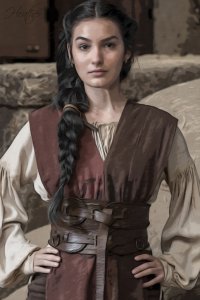 Physical Description of Persona:
Saidrene has long, inky black hair just like her mother. The tresses shine a blue-black hue in the sunlight and frame a heart-shaped face. Her eyes belong to her father and are round, hazel orbs beneath arched eyebrows. The greenrider has a short, petite frame that is leanly muscled, and slightly rounded it the bust and hip.

Emotional Description of Persona:
Saidrene is a complex bundle of emotions. While she dearly loves to laugh, tease, and play, she also is a good listener and shows empathy for others. Quick-witted and sharped tongued, Saidrene works diligently at the tasks she is given, but when her duties are over, she likes to gossip, share a drink, and unwind. She is a passionate lover and very loyal to her friends and those she cares about.

History of Persona:
Saidrene was born to goldrider Saibra and brownrider K'fel at Far Island Weyr. She had a traditional Weyrbrat upbringing, although she did stay with her parents a lot more then since Thread was an not yet falling. When she was eight Thread returned and her father perished in that first Turn of the Pass. She never let on how much her father's death hurt her because she had a little brother, Kaibren, watching her. Even though they fight constantly, Saidrene does love her brother... Most of the time.

When her mother told her that they were moving to Dolphin Cove Saidrene felt rather indifferent. Being a goldrider's daughter placed certain expectations on her no matter where she was. Saidrene was glad to be able to continue her dragon healing craft training once she reached Dolphin Cove and Impressed Green Ashareth.

At Dolphin Cove, Saidrene engaged in a complicated intimate relationship with her best friend, a bronzerider named J'ackt. After more than a Turn of finding themselves in each others beds, the startling discovery was made that Saidrene's uncle, K'yne, was J'ackt's biological father, making her and J'ackt first cousins. At first repulsed by the discovery, Saidrene tried to keep J'ackt at arms length, but the two of them quickly found themselves in bed together again.

When J'ackt weyrmated Saidrene's best friend, a greenrider named Alina, their physical relationship finally came to an end, which was crushing for Saidrene. Even though she knew it was wrong, the relationship she shared with J'ackt had always been special, he knew her better than anyone.

For a while, Saidrene was able to continue being Alina's best friend and J'actk's closest friend, while she pursued a romantic interest with her Wingleader, K'ran. Things didn't go very far, beyond a couple of tumbles in the furs, before K'ran left to become Lord Weyrholder of Barrier Lake.

Tired of being the third wheel, and ready to start writing her own future, Saidrene transferred to Barrier Lake. Once there her green Ashareth was flown by J'ackt's bronze Zith while he was visiting. The flight gave Saidrene and J'ackt the opportunity to be intimate without fear of repercussions.

J'ackt went back to Dolphin Cove and Saidrene continued at Barrier Lake, finally getting the opportunity to explore her relationship with K'ran, who had agreed to see where things went between them. It wasn't long, however, before Saidrene realized that she was pregnant, and either J'ackt or K'ran could be the father.

Dragon's Name: Ashareth
Dragon's Age: 3
Dragon's Colour: Green
Next Mating Flight: m9 d1
Description of Dragon:
Ashareth is a very pale, mint green dragon with darker undertones shadowed beneath her wingsails and belly. She is average in size, with a delicately shaped head, and a long powerful tail. In temperament Ashareth is quick, and snappy, but generally means nothing by it.