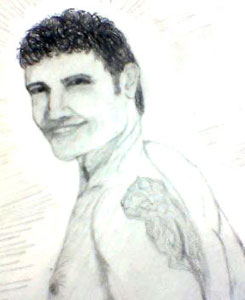 Physical Description of Persona:
U'kaiah is about 6'3" with a lean but muscular build that he maintains by daily exercise, especially swimming. He keeps his wavy black hair a little long on top, but trimmed neatly along the sides. His dark brown eyes spark with intelligence. His features are strong, yet handsome. He is proud of the scars he earned during Threadfall on his left shoulder blade, and is not in the least selfconcious of showing them.

Emotional Description of Persona:
U'kaiah has great ambitions. His one goal in life is to become a Weryleader someday. He, like his dragon, has a strong competitive streak, and does not like to lose to anyone. When faced when a problem he always looks at it logically and he learns as much from other people's mistakes as his own.

His is great at giving logical and straightforward advice, but is lost when it comes to matters of love. Love, being by nature irrational and self-denying, is a complete mystery to him and so he avoids romantic attachments whenever possible for the simple reason that it always ends in disaster. Besides, it might get in the way of his ultimate goal.

Though cold and calculating when fighting Thread or drilling, he also knows how to relax and have fun with his wingriders. He has a good sense of humor and can drink any man under the table, or at least he could in his younger days. He has mellowed over the Turns and has found the value of a quiet drink with some good friends. His tactical ability and arbitration skills earned him the respect of peers and superiors alike.

While he still enjoys the ladies, lately he has seemed to have stumbled into something of a family life. Surprisingly, he has found that he enjoys not only the company of his lovers, but of his children as well, and is seeking company outside his circle less and less.

Despite his friendly and open nature, U'kaiah is not without his inner battles. His temper has at times flared dangerously, though he fights to keep it under control. He also has learned to be jealous and suspicious after a failed relationship. The bronzerider is afraid of losing those he loves, and therefore can be tempted to try to keep and control them when he feels his position is threatened. All this he knows about himself, and though he tries his best to take the path of reason, he is prone to stumble from time to time.

History of Persona:
Uzrakaiah was born to a bronzerider and a goldrider in the north as the result of a mating flight. Both were much to busy to have much to do with bringing up the child, and so he was given to a fostermother to raise. She brought him with her to Dragonsfall Weyr at an early age when her weyrmate transfered south for his health. Because of his lineage, his fostermother always told him it was his destiny to be a Weryleader someday. The young Uzrakaiah soon learned that the other children did not share his fostermother's opinion, and finally started letting the other boys be "Weyrleader" sometimes in their games. But deep inside he believed everything his fostermother told him.

To better prepare himself for his destiny, he decided to apprentice to the Harper craft, and dedicated himself to the archives which held the stories of great tacticians and Weyrleaders of old. There he also learned the art of arbitration and tact outside of Threadfall. When he Impressed bronze Kalamath at the age of 16, it seemed to confirm that he was indeed destined for the top.

As a Weyrling, U'kaiah developed a deep respect for Weyrlingmaster D'wrayt. He learned many things under his watch, including that it took more to be a dragonrider and a leader than just desire. Though he no longer believes he is destined to be Weyrleader by lineage, he is determined to someday achieve his goal through hard work and dedication. After graduating to a wing, he never lost his love for the archives. He can often be found there on restdays when he is not sleeping something (or someone) off and is continuing to work towards his Sr. Journeyman knots.

Having earned the respect of the other riders of the Weyr through his dedication and skill, he was promoted to Wingsecond of Cyan Wing. At the age of 27 turns he was surprised by his mentor and Weyrleader with an even further honor - the leadership of an entire wing.

A few months after assuming his new rank, U'kaiah had a brief love affair with the Weyrwoman, Jaela, which was cut short when she died from an eptopic pregnancy. While still in the process of mourning his lover's death, a wingrider's prank resulted in him losing control of his temper. He instigated a fight with the wingrider in the middle of the dining hall. There was no hiding his shameful act, and as a result was demoted to assisting the Weyrling Wing until such time as he could prove that he was worthy of leading Cyan again. After finally earning his knots back, he was determined not to make the same mistake again.

For a time, U'kaiah carried on a love affair with the Dolphin Cove Weyrwoman, Traelyn. They had met when she was still just a Weyrwoman Second at Dragonsfall, and remained the closest of friends even after she left his Weyr. After more than a Turn of close friendship, the two discovered their feelings went deeper, and they become lovers. However, less than a Turn later, Traelyn threw open her Flight in the hope that U'kaiah might become her Weyrleader at Dolphin Cove. He could not leave his home, and despite the opportunity to gain the leadership of a Weyr, and be with the woman he loved, he did not participate. Soon after, he learned that Traelyn had been in a secret relationship with another rider at her Weyr, which she took public after U'kaiah didn't show. The devastated bronzerider ended their relationship, which lead to the loss of their friendship as well. It was a hard blow that has had repercussions on the relationships that followed.

Not long after the ending of his affair with Trae, his temper almost cost him yet again when he lost a Senior Gold Flight. Though the details of what actually happened are vague, it seemed the dragonlust lead to a young woman being raped by him. He is deeply ashamed of that incident, and tries his best to avoid making the same mistake.

However, he has been nothing but gentle and patient with a young greenrider who was in his Wing for a time, Aileyan. Though she at first rebuffed his advances, over time they fell in love with each other, and U'kaiah has taken on the role of father-figure for her young son, Ravyan. Their relationship is threatened, however, by the introduction of another woman - Tavia - a greenrider who U'kaiah met Turns before at Dolphin Cove. When they came together once more at Dragonsfall, they thought they were just in it for a bit of fun, until she found herself with child. He stood by her throughout the pregnancy, and not only did he gain another son, he and Tavia found they also had feelings for each other. It was U'kaiah's hope that his two families could learn to share him and perhaps even become one cohesive unit.

To that end, Tavia and their son Kaiavin transferred to Dragonsfall. Soon after, however, disaster struck a Northern weyr, and U'kaiah felt duty bound to follow the Weyrwoman Hygalia to aid in their recovery to fill the role of acting Weyrleader. What he had thought would be a temporary assignment turned into a seemingly permanent arrangement, putting a painful strain on his relationships with his lovers and children. It remains to be seen if his family can endure the separation.

Dragon's Name: Kalamath
Dragon's Age: 18
Dragon's Colour: Bronze
Description of Dragon:
Kalamath has a bit of a competitive streak to him, which suits his rider just fine. He loves to chase both greens and golds, and can become quite moody when he loses. During a fall he attacks Thread with the same dedication to purpose as when he chases. He never is afraid of voicing his opinion to his rider, whether it is asked for or not. But most of the time he is quite laid back with a good sense of humor.