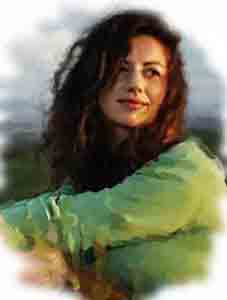 Physical Description of Persona:
The first thing a woman would notice about Jaylene is that she is on the tall side (standing in at the same height as her younger brother, J'zen...both are 5'8"); the first thing a bronze rider would notice are her 'attributes' and the first thing a blue or green rider would see is her confidence. Physically she wouldn't be the prettiest girl in the Weyr but she more than makes up for this with her bloody-minded sensuality. And it helps being curvy and having thick, wavy hair that she keeps long (braided into a bun when she fights Thread) that is black like her family's at the roots but is sun faded to auburn. She keeps it tousled for that 'just out of bed' look.

Her best facial feature are her huge, soft brown eyes, and her smile. Her nose is a bit on the strong side and she has a dimple on her chin. Overall her face has a soft look, rather than chiseled which, secretly, annoys her a bit.

Her frame is light boned and trim, with narrow hips and legs. She carries the muscle of being a dragon rider, and tends to dress in her riding clothing when it's not too hot to do so. Otherwise she wears trousers and revealing shirts. Despite the lack of fat, she still manages to be curvy and is very feminine in appearance.

Emotional Description of Persona:
Jaylene is supremely confident. If she holds any insecurities she hides it well. She knows what she likes and she doesn't hold back. Being a dragon rider and the child of a dragon rider who was killed fighting Thread, she's all too aware of the dangers of her life and tends to keep her outlook to the here and now, not worrying about tomorrow. She lives big, drinks big and loves big, much to many a man's detriment. She's not one to be tied down to any one person at a time and sees nothing wrong with that outlook. At times she can come over as loud and crass but that's other people's problem, not hers.

History of Persona:
She is the eldest child of a blue rider and a young woman who came to River's Buff Weyr to become a Harper. Three other children followed. In the first turn of Threadfall their father died of injuries sustained from a terrible scoring.

When she was 12 Jaylene followed her mother into the Harper Craft, showing a talent on the fiddle. She also Stood a few times on the Sands before a tiny Reanth found her. The next two boys also followed their sister onto the Sands, and likewise both Impressed greens. Tragically, the eldest boy, J'lan, died just two turns ago, during Threadfall. Rather than letting his death destroy their spirit, she and the remaining brothers have tried to live their lives to the fullest. Likewise, she and her brothers also tend to live in the here and now and not worry about things out of their control. Rarely and only in the presence of a very close friend will she let her guard down and grieve for her brother and father.

She and her brothers like to call themselves 'the three Jays,' in honour of their names (J'zen was once Jayzen). When it was the four siblings they didn't get along as famously as they do now. She and J'zen tended to disagree about everything but both dotted on their youngest brother. After J'lan's death, the two remaining eldest became very close and all three support and watch over one another, and their mother.

Jaylene has gone through several relationships, none lasting more than a few weeks. This is more her fault (to which she'll readily admit) than to any problems with her lovers. Lately her green seems to be getting caught by blue's (no doubt due to her smallness) much to Jaylene's bemusement. One thing she doesn't tolerate is any notion of traditional female roles and ways of acting, nor anyone speaking ill of any of her brothers and of the two eldest's sexual orientation.

During a hard Fall that came before a storm, she and Reanth rescued an injured bluerider. Due to that--and her good work within the wink--K'sedel promoted her to his wingthird.

After River's Buff was destroyed she transferred to Dragonsfall, again as wingthird. Recently her baby brother Impressed a bronze, becoming J'nne.

Dragon's Name: Reanth
Dragon's Age: 17
Dragon's Colour: Green
Next Mating Flight: m9 d12
Description of Dragon:
Reanth is a small green, dainty in stature. She's much more demure than her rider and can be considered almost shy for a green dragon. Her hide is a luminous sea green, fading in her wings an almost translucent green. Despite her rider's preference for a bronze rider, Reanth herself much prefers blue's. She's curious about everything and enjoys visiting new Weyrs and meeting new dragons.