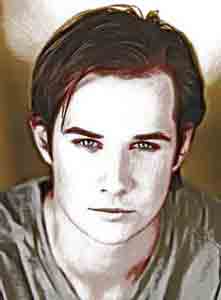 Physical Description of Persona:
Of average height, Z'ku has put on lean muscle due to the demands of dragonriding life. He has dark hair and blue eyes.

Emotional Description of Persona:
Z'ku is a serious man, especially when it comes to his duties. He's also ambitious, hoping to be a Wingleader someday, and perhaps even Weyrleader. He can be a bit cold and calculating, but beneath his ambition, he has a good heart.

History of Persona:
Ziiku is the third son of a wealthy holder and struggled to keep up with his older brothers. Although their equal in most things, he had little chance of inheriting more than a small piece of his family's holding. When a Search dragon marked him as a possible Candidate, he welcomed the chance to be something more than a holder's middle son. He spent a Turn at Rising Moons and moved to Dolphin Cove when they put out the call for older Candidates.

Bronze Xemroth chose him, confirming that Z'ku had made the right decision.

Z'ku and Pierka were nursing broken hearts when they became friends and Z'ku helped her through her pregnancy. Their relationship grew into romantic feelings and they became weyrmates. Z'ku views Kazom as his son and the couple decided to have a second child, Kupier.

He's surprised at how much he enjoys the domestic side of life and considers himself a very lucky man.

Dragon's Name: Xemroth
Dragon's Age: 5
Dragon's Colour: Bronze
Description of Dragon:
Less serious than his rider, Xemroth a bit of a daredevil, wanting to push the limits of his abilities and impress his fellow dragons. Z'ku's cool head can usually restrain him, and they have a strong record as wingriders.