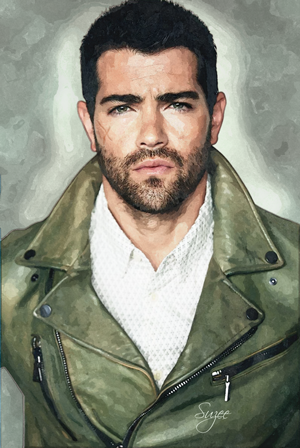 Physical Description of Persona:
N'call's height and physique match each other perfectly; tall and wiry. His bright green eyes shine with his intelligence and boyish enthusiasm. While his black hair frames his face and rather large, ax-like nose. He bears an "X" shaped scar on his left cheek from his early days as a rider.

Emotional Description of Persona:
Your first thought of N'call is brownrider, or even blue; then you notice his knots. He is young at heart and, exaggerated. A natural born flirt, even though he can't turn it on when he wants to. Women he's after often think of him more as a "friend". He gets frustrated with people who can't grasp simple concepts and often has to leave a room when someone is acting "dumb".

But under all the frustration and exuberance is a lingering pain. Though the physical pain has left, the constant reminders continue to bring back hurtful memories. He has spoken with mindhealers and understands it's not his fault , that the Thread would have still been there whether he came out of /between/ then or not, but the facts still lie.

History of Persona:
Nicallen was born to a bluerider and his weyrmate at Dragonsfall. He grew up as a troublesome weyrbrat, a child of the Weyr. He was forever fascinated with the Weyrharper and his instruments. He began a formal apprenticeship at age twelve and soon moved to the main Hall at Emerald Falls to learn more about making his beloved instruments.

He received his Journeymanship at age eighteen and took the opportunity of the upcoming Hatching to take a "vacation" home. Little did he know what that vacation would hold.

He was sitting in the Stands with his mother and sister, watching the Hatching unfold. Enthralled with the pairing of human and dragon, he didn't even flinch when the crowd gasped and moved away from a disturbance at the stairs down by the Sands. He didn't even look away until his sister shook him, pointing to the disturbance. A small bronze dragonet was crying for its lifemate, trying to climb the stairs to someone. Nicallen stared in disbelief as the bronze told him he was looking for N'call.

The untimely Impression gave the younger N'call a chance to see a side of life he never thought he'd live, that of a dragonrider. He jumped into the care of his dragon and the teachings he'd missed to hide the small hurt that this Impression would slow or even halt his plans to earn his Master's knots.

But his unusual Impression wasn't the end of N'call's luck. On the day of his Blooding he came out of /between/ into a nasty tangle of Thread. The scoring left him bedridden for months as he and his dragon healed from the terrible Fall. The scars on his face and body are constant reminders of that second fateful day in N'call's life and push him to fight his hardest out in Threadfall.

Dragon's Name: Haloth
Dragon's Age: 12
Dragon's Colour: Bronze
Description of Dragon:
A large bronze. His color is more gold than bronze but his mind is all male. He has a long scar running from his right nostril and slanting downward to his lower right cheek. He has a crossed scar on his left wrist and a long scar on his lower right arm on the inside, running from elbow to claw. Further reminders to his rider to be watchful of Thread.

He is a staunch defender to his rider, like all dragons; and is often the rock in the pairing. He reflects his riders boisterous personality, often having the attitude of a weyrling and getting interested in the smallest things.