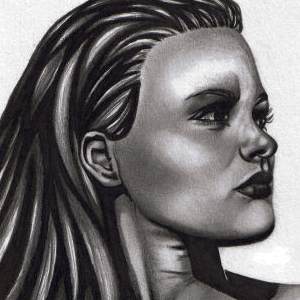 Physical Description of Persona:
Traelyn stands at 5' 7" and has a slender build with slight shoulders and a slim waist. Long, very fine white-blonde hair that she inherited from her Northern-born mother cuts off bluntly at her mid-back. Thanks to her father's Southern heritage, her fair skin tans readily in the sun. She has a narrow face framed by high cheekbones and very large, dark eyes that are a striking contrast to her rather golden complexion.

Emotional Description of Persona:
Growing up at Far Island Weyr has given Traelyn an unquenchable thirst for knowledge and an independent will. She is open-minded but will definitely have her opinions once she's formed them, and she is extremely loyal to what she believes in and to those she deeply cares for. Though Traelyn has the strong potential to be a leader, she would rather be a follower - but if certain need arises for her to take charge, there is no doubt that she will follow through.

Traelyn is a friendly person and loves to socialize (it has always been easy for her to make friends, even when she was a little girl), but she doesn't mind the peace of solitude every once and a while. Though it may not look like she does on the outside, Traelyn harbors a flaring temper within that is said to rival even her father's, and though she is quick to anger, she is just as quick to be tender. But even with that temper, she has never made any truly rash decisions work-wise that most people tend to make when they let their emotions rule them, which makes her an ideal rider for a gold dragon. Unfortunately, the same doesn't apply to her personal life.

History of Persona:
Traelyn was born the last of four children to a bronzerider and his greenrider weyrmate of Far Island Weyr. She was an imp of a weyrbrat, and when she wasn't getting into mischief with her playmates, she was found in the classrooms of the Weyr, pestering the Masters, Journeymen and Journeywomen, or apprentices there with questions. It seemed that her hunger for knowledge could never be sated, but the subject that she always thought was the most fascinating was, of course, the dragons and everything that had to do with them.

While growing up, Traelyn had a very close relationship with her father; she was more like him than her mother personality-wise. She inherited from him his sense of humor, his determination and his infamous temper, which, as the Turns went by, she never seemed to grow out of.

When she turned thirteen, Traelyn was called to stand as a Candidate. She didn't Impress then, to her disappointment, nor did she her second or even third time standing. Undaunted, Traelyn continued to stand on the Sands until she was seventeen Turns - and at last Impression occurred. Golden Nyith chose her to be her lifemate - much to Traelyn's astounded delight!

Traelyn became the third queenrider of Far Island Weyr. Once she had graduated Weyrlinghood, the Weyrwoman recognized that Traelyn was ready to begin learning how to handle the duties of a Weyrwoman Second, and so she and her current Weyrwoman Second began training her.

When Traelyn turned twenty-six, a call from Dragonsfall Weyr was sent out to all the other Weyrs for a goldrider to fill in the needed position of Weyrwoman Second. And although Traelyn was hesitant about leaving her home and everything that was familiar to her, she followed her Weyrwoman's advice and accepted to take the position.

She took to her new position very well. Traelyn met and formed surprisingly strong friendships and ties with many of the men there. But just when she was beginning to truly settle in and start calling Dragonsfall her home, Traelyn made the first, truly rash mistake of her life by taking Nyith out of the Weyr to the Dolphin Cove territory too close to her rising time. Because of Dolphin Cove's senior queen's extensive injuries from the Threadfall disaster the month before, she was unable to rise to mate, and Traelyn became the new senior Weyrwoman there by default.

Now she must leave Dragonsfall behind and begin a new - and competely unexpected - part of her life as Dolphin Cove's Weyrwoman.

Dragon's Name: Nyith
Dragon's Age: 16
Dragon's Colour: Gold
Description of Dragon:
Nyith is amber-golden in color, a rather unique and beautiful hue. Her body is strong and lithe, her wings long and sweeping. Many would call Nyith high-strung for she is of a sensual nature and enjoys the company of the male dragons of the Weyr - especially the bronzes and occasionally one or two chosen browns.