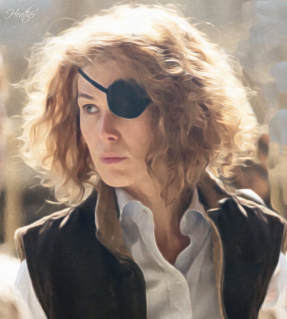 Physical Description of Persona:
Rasme is a slightly taller than average at 57 with an athletic build that has not diminished with age. The goldrider takes good care of herself physically through diet and exercise, not for vain reasons, but because of her slightly neurotic need to be in control of her body and everything else in her life.


Untamable wavy hair, that borders on frizzy, is kept in a tight golden braid the majority of the time and within the past five Turns has begun to reveal a few white streaks here and there, giving Rasmes thick mane a natural highlight. She has a sharp, straight nose that divides the symmetric, high cheekbones of a rather stoic face. Beneath arched eyebrows once rested two piercingly blue eyes that have recently developed fine lines around the corners.


After the return of Threadfall, however, Rasme was blinded in her left eye while assisting in the catch of a falling pair. The eye never recovered, filming over and turning a weak shade of blue, and so Rasme began wearing a patch over it and has continued to do so ever since.

Emotional Description of Persona:
Rasme is blunt and to the point about everything. If something bothers her, she would rather deal with it immediately, almost impatiently, rather than sit and let the matter fester. While not afraid of confrontation, Rasme does try to avoid it. As an introvert, Rasme needs time to be alone and recharge and she detests small talk. She isnt one to smile needlessly and only does so if she finds something amusing, which leads some to find her standoffish or unapproachable; Rasme actually has a wicked sense of humor that only those closest to her get to experience.


As someone who is driven by duties and her studies, Rasme has often had difficulty maintaining and cultivating relationships. All of her children are products of flights or casual encounters with only her youngest coming from a more invested relationship.

History of Persona:
Rasme is the product of a mating flight and only remembers one parent in her childhood, the foster mother who raised her in the creche. She has fond memories of Rugatha, the foster mother, and of her foster siblings. As a child, Rasme was feisty and curious and disliked being told what to do, despite also having a need to please those in authority over her. The one thing that Rasme truly enjoyed were her harper lessons, so much so that she considered apprenticing to the harpers when she came of age. When the time came, however, she found herself persuaded by the Weyrdragonhealer to apprentice there and she has never regretted that decision.


At sixteen, Rasme Impressed to gold Piketh her second time on the Sands, since she had decided that shed better get started Standing, or otherwise be unable to progress through the dragonhealer ranks. Impressing to a gold was not something that Rasme had ever dreamed of as she had been fairly certain that a gold would never be interested in a little weyrbrat such as herself. Piketh proved to be, however, just the stability that Rasme had been lacking in her life.


With no Thread falling, Rasme had plenty of time to pursue her craft once she and Piketh had graduated from Weyrlinghood. The subsequent Turns of Rasmes life were filled with dragonhealer work and having children. At 18 she had her first child, a son, Dasmen, a result of Pikeths first gold flight. Then at 21 she had her first daughter, Xasvi; at 23 another daughter, Asmrey; at 27 a son, Jasmer; and at 32 another son, Ragmar. At that point in her life, Rasme assumed that she was done with children.


In between the births of her children, all from different fathers, Rasme attained the rank of Journeywoman. While she devoted as much of her time to her studies as she could, between her duties as a goldrider, Rasme also made a concerted effort to be present in the lives of her children, but many of them were raised by Rugatha.


At forty-five, Rasme was surprised with her last pregnancy, one thirteen Turns apart from her last. Perhaps because of the surprise, and because of her unexpected feelings of attachment to the father of the children, Rasme has perhaps given more motherly attention to her youngest child, a daughter, Casmari, than any of her other children.


When she was forty-seven, Thread began falling again and the peaceful, studious life that she had known was thrown upside down. During that first Turn of Threadfall, Rasme was blinded in her left eye after suffering an injury during a catch and rescue. The injury permanently grounded Rasme from flying Threadfall, but she managed to cope since Piketh could still enjoy mating flights and she could devote more time to helping those dragons injured during Threadfall. It was a Turn later that Piketh rose to mate but sustained life altering wounds when another, younger gold happened to be within Pikeths flight territory. The fight for supremacy left both golds wounded, although fortunately for them both, the wounds suffered were not fatal.


Piketh spent several sevendays in the dragon infirmary, slowly healing from the deep gouges she had sustained in her abdomen and chest from the other queens talons. While the tattered wingsails eventually healed and Piketh learned to compensate for her new limp, she never regained her reproductive abilities and never again rose to mate.


While Rasme had weathered her own retirement from fighting Thread rather well, Pikeths inability to reproduce hit Rasme hard. Both rider and dragon struggled with the need to feel relevant or useful. It took the better part of a Turn for the pair to work their way out of their depression and focus fully on what they could do- dragonhealing. The craft became the saving grace of both Rasme and Piketh. While Piketh could work with frenzied, injured dragons through her calming authority, Rasme could do what she did best, heal them.


Seven Turns after Piketh's injury, and with no chance of the gold ever being a clutch producer again, Rasme and Piketh finally felt ready to move on from Vista Point. Rasme was ready to continue pursuing her craft and had heard good things about the Weyrdragonhealer at Dolphin Cove Weyr.

After spending a few months at Dolphin Cove, Rasme became enthralled with Barrier Lake's new dragon infirmary set-up when she was visiting the Weyrhold. Unable to resist the urge, Rasme uprooted her mother and daughter one more time to settle at the lakeside Weyr.

Dragon's Name: Piketh
Dragon's Age: 39
Dragon's Colour: Gold
Description of Dragon:
Piketh is an average sized gold the color of wheat. There is visible scaring along her wingsails and across her chest and abdomen. The scars have begun to appear less fresh and have faded over the past several turns. The gold moves with a noticeable limp when she is on her hind legs, but apart from a slightly rocky take-off, the gold is still able to fly casually. Piketh is pragmatic and now that she no longer rises to mate, she has lost any possessiveness over males or territory. The only thing that Piketh is possessive about is the warm, sunny spot on her ledge.