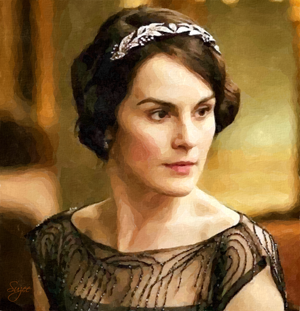 Physical Description of Persona:
Brina bears only a subtle resemblance to her brother Bryvin. She has long, wavy dark brown hair, usually braided and pinned up neatly, and threaded with the first strands of silver. Restrained in her manners and expressions, her elegant features usually appear calm and composed, but there is a hint of confidence and strong will in her clear brown eyes.

No fragile lady, Brina enjoys walking and riding, and has a slim but strong and healthy figure. Her dress is modest but tasteful, and usually subdued in colour and style due to the loss of her husband.

Emotional Description of Persona:
Brina places high value on duty, proper behaviour and presenting herself to the world with the dignity that befits her rank and birth. Although she is unfailingly polite and generous, there are few people she is close enough to relax with and reveal her inner thoughts. Despite their long separation, her brother counts as one of these and she has complete trust in him.

There is an active and capable side to Brina's character. During her marriage, she managed the hold staff and made several suggestions to improve their prosperity, and her husband came to rely greatly on her judgement. On certain matters she can be unexpectedly determined and will argue her case. She is particularly firm about the expected behaviour of young people under her care. Ultimately she has a conventional view of life in which a woman lives under the protection of her father or husband, but she is slowly coming to terms with her new place in society as a widow.

Although she has faced difficulties, she has always been shielded from the harsher aspects of life for those who were not born with her rank and privileges. She has a more innocent view of the world than many of those around her, and chooses not to see the murkier side of life in Sunstone Seahold, preferring to believe that most people are essentially good.

History of Persona:
Brina was born and grew up at Amethyst Cliff Hold, one of only two surviving children of Brylor, an assistant steward and his wife Jovina. Distantly related to the Lord Holder, she had a sheltered and genteel upbringing. Her parents, though loving, had suffered the loss of their other children in the plagues and her father in particular never truly recovered. Too young to understand their grief, Brina grew up close to her younger brother Bryvin.

After her father's death when she was fourteen, her mother remarried and shortly afterwards, her new stepfather found a prospective husband for her: Kelfen, a young beastcrafter who'd lost his wife to a fever following childbirth. Their first few Turns together were not easy, since he was still mourning his first wife and was often absent on craft business, while Brina, lonely and homesick had to learn to take care of his four young children. In time, they grew to respect and care for each other, though they never had the passionate romantic attachment that she had dreamed of as a young girl. After ten Turns of marriage, their only child, a daughter, was born.

Kelfen was promoted to master and inherited the minor hold where they lived on his father's death. Brina devoted herself to bringing up the children and, when they were older, finding good husbands for the girls. She was very successful, in particular with her own daughter, who married the handsome, wealthy young heir to a minor hold with connections to the Lord of Garnet Valley.

With the children gone, she expected to lead a quiet life, managing the hold alongside her husband and paying occasional visits to her daughter, but only a few Turns later, her husband fell ill and the healers could do nothing to help him. He died leaving her under the care of her eldest stepson.

Brina's life changed again when she received a letter from her brother, who had left Amethyst Cliff, worked his way up to a position as steward and had then been chosen to inherit the title of Lord of Sunstone Seahold. Having heard of her husband's death, he offered her a place to live at his Hold and the role of chaperone to the young ladies who'd been sent there to be fostered. By this time her family situation soon became uncomfortable, with tension between Brina and her stepson's wife over the running of the hold, so she was glad and relieved to accept.