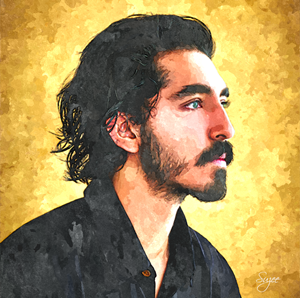 Physical Description of Persona:
With dark, curly hair that skims his shoulders (usually pulled back), dark skin, sharp cheekbones and an aquiline nose, Hrun would be considered attractive enough-- but he also has startling green eyes rimmed with long, soft lashes. Hes fairly tall, slim-yet-muscular, and has a taste for fine clothes. He spends an inordinate amount of time grooming and has a large collection of perfumes, lotions and oils that he dips into regularly. Hed kill his own mother for a weyr with a private bath.

Emotional Description of Persona:
Hrun is charismatic and intelligent, but also self-centred and a bit cowardly. The bluerider thinks quickly and decisively, and is good at puzzling through problems and finding solutions. Irritatingly, hes often right. He likes to be admired, and if he thinks that solving a problem or doing the work wont be recognized, he isnt interested in doing it. He likes novelty and loves falling in love. If he cant be admired, then hell happily accept pity. All this means that Hrun tends to be exciting to be around and quite dramatic.

History of Persona:
Harun was born to a small cothold a half-days walk from Sapphire Meadows Hold. As a child he loved to be the centre of attention and learned how best to push his parents and siblings buttons to get what he wanted. He was a lazy child and often avoided his chores by running away or feigning illness, however he loved his Harper classes-- both the mental challenge and the opportunity to show off.

When he was twelve his parents quite happily bundled him off to the Harper Hall to apprentice. Here he discovered a whole new world of people he could impress. He was clever and quick, and although his teachers found him trying they did recognize his ability to hold the attention of a group. At fourteen he was Searched, and the Harper Hall sent him back to Dreams End Weyr with relief.

This was a boon for Harun, as hed realized a few Turns earlier that he was equally attracted to boys as well as girls. He didnt have to be circumspect at the Weyr and he loved being able to court whomever he wanted. The downside to being Searched was that regular Candidate classes were boring and the harpers at the Weyr werent as interested in catering to the whims of a young apprentice as his teachers had been at the Harper Hall. In order to build his popularity and influence in his new home he worked to catch the attention of the Weyrharper. It worked, and the Weyrharper was impressed enough that the older man offered to be his mentor.

When he was sixteen, Harun Impressed blue Calsifeth and his life didnt change as much as people told him it would. He continued to flit from lover to lover, dress well, and train with the Weyrharper. Things only really changed when Thread returned. His mentor died within the first Turn of the Pass and Hrun suffered without his steadying influence. His moods swung more wildly, he fell in love harder, fell out of love faster, and became more self-centered than hed ever been. Eventually he was politely asked to transfer to a new Weyr.

Dragon's Name: Calcifeth
Dragon's Age: 11
Dragon's Colour: Blue
Description of Dragon:
Calcifeth's hide is a rippling, mottled blue that goes from bright sapphire to a light indigo. He is both as friendly and as vain as his rider, and loves attention-- any attention. He has a few old scars across his tail and hindquarters as mementos from the first Turn of the current Pass.