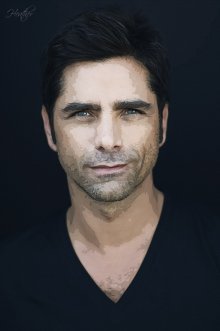 Physical Description of Persona:
T'kev is 6'0" even, although with the way he often carries himself, people might be surprised to know that he's actually that tall. He has has a natural bronze glow to his skin, inherited from his father's side of the family, which accentuate his greyish-blue eyes and inky black hair. There are laugh lines at the corners of his eyes from when times were better, he is very rarely seen so jovial since the destruction of River Bluff.

Emotional Description of Persona:
T'kev struggles with regret. After quarreling with his brother, the two broke contact, and after River Bluff fell, T'kev learned that his brother had perished. Unable to cope with the loss, and his inability to make things right, T'kev turned to alcohol for the solution to his problems. Although the bluerider could have been described as jovial and witty at one time, he has since become quiet and withdrawn.

History of Persona:
T'kev was born a weyrbrat and spent most of his childhood getting into trouble in the lower caverns with his brother Tacharl. The two, although far apart in age, were very close. Tacharl was never Searched, nor stood, but was content to labor with his hands. T'kev Impressed when he was 18 to a blue named Jeminath, which was just perfect for T'kev, and not shocking to anyone who knew him well.

Because of the differences in age, T'kev and Tacharl drifted apart, with Tacharl marrying and having several children with his wife and T'kev focusing on his duties as a dragonrider. The two brothers had a falling out when T'kev over heard Tacharl speaking to his wife, hoping that one of their sons would not Impress to a green dragon. T'kev was unable to accept the "holder" type attitude from his brother, especially since they had both been raised in the Weyr.

Whether it was taken out of context, or a misunderstanding, T'kev would never find out. After moving to Dragonsfall, two Turns later River Bluff would collapse, taking his brother with it. The children left behind by Tacharl, T'kev's nieces and nephews, arrived at Dragonsfall, but T'kev, already deep into the bottle, was unable to give them the support that they needed.

Dragon's Name: Jeminath
Dragon's Age: 21
Dragon's Colour: Blue
Description of Dragon:
Jeminath is a large sky blue dragon with a wingspan only a smidge shorter than a small brown's. His attitude mostly mirrors his riders, although he has had more reason to worry as his rider turned more and more to the bottle.