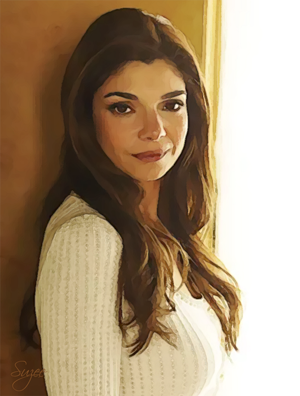 Physical Description of Persona:
Lusilk is of average height, slender and has lean muscle that is usually covered by drab, nondescript clothing. Her dark hair falls to her mid-back and is kept in a tight braid from her crown to along her spine. She is not a beautiful woman, but is rather plain, though her large dark eyes are striking and lined with heavy thick lashes. She isn't one to catch anyone's eye, but blends in to a crowd as mostly unremarkable.

What she hides beneath her clothes is a tale that she doesn't desire to tell. Along her back, hips, and legs are long, thin, wicked looking scars. The skin on her shoulders and along her waist and buttocks are pocked with round, shiny burn scars. Directly between her shoulder blades is a smaller, neater scar, a circular brand. Because the story behind them is private, she rarely bathes in public.

Emotional Description of Persona:
Lusilk is a woman who is pragmatic, self-reliant, sly, strong, and capable of violence should it be required of her. Intelligent and resourceful, she does what she must to earn her way and care for the one person most important to her. She sheds no tears for those she might harm if they put her or that person at risk and holds no illusions that following closely held traditions are of any real benefit.

Lusilk is an admirable actress and can shift her perceived personality to suit her needs at the moment. Because she blends in so well, people very rarely know the real person behind the masks that she wears.

History of Persona:
Lusilk was brought up in a poor cothold near a minor Hold, barely better than being Holdless. Her father dead and her mother doing what she could to survive, Lusilk learned early that one had to do whatever it took to survive. Her mother, in an effort to keep her children fed, traded and dealt with local bandits and holdless, providing them warm beds, food, and resources (and sometimes more) to keep their larders full. Lusilk learned from the hardened men, many of whom found it amusing to teach their own craft to the young girl. What they didn't expect is that she would learn so well and show promise. At a young age, she became a respected member of a local band of bandits, used for her quick mind and reflexes as well as her ability to blend in. Her reputation in the seedier areas of Pern grew.

She was only caught once and the man who caught her was in a position of power. Her crime was minor, but the man's son and only heir took pleasure in exacting his own revenge. His father allowed it, for he was hardly a decent man, and believed that the "punishment" would teach Lusilk to never again work against his interests.

When Lusilk escaped with the help of contacts, she was visibly with child. It was with pleasure when only a few weeks later that the man's son had died. That pleasure quickly faded when she also learned that the child she carried was now sought for. Despite her background, the powerful man wanted the child desperately, male or female, to carry on his line. Lusilk went into hiding, moving far from the area, but always on guard, knowing that the man would never stop looking.

After giving birth, she used her skills to rebuild a local reputation. Soon she was sought out by those who needed her skills to perform private tasks for individuals who needed situations taken care of privately. Whether it be thieving, spying, or death, if it was contracted to her, she did it for healthy sums of marks. But no longer was it only for her; she used what she gained to protect her son.

It was only after the failed assassination attempt of a smith named Lorican, and a resulting fight to the death with the bandits who had contracted for her, then refused to pay, that Lusilk had finally had enough. Desperate to provide some sort of stability and safety for her son, she fled the area, making her way to the new Weyrhold. She hoped there, with the large population, she could find some measure of peace and her son would be hidden away, safe.