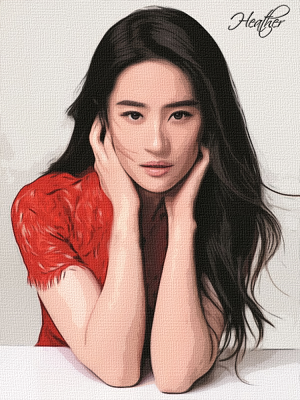 Physical Description of Persona:
Ranni is not a classic beauty, nor would she probably catch your eye at first. She has shoulder length black hair that could be pretty, but is often pulled back in a tight braid. She has high, sloped cheekbones, and almond eyes that are so dark-brown you would think they are black. Her lips are full and soft, but rarely pulled up into a smile, unless forced.

Ranni is short and petite, only 5'4" in height, with a slender, child-like form that makes her appear even younger than she is. She dresses in the typical rough, sturdy clothes of a drudge, something usually dark in color.

Emotional Description of Persona:
Ranni is sharp and quick-witted when it comes to street smarts, she understands how people work, the way others manipulate weaker individuals to get what they want, and she understands the value of a woman's body. She has witnessed all of those things personally. Her harper education, however, ends at the basic lessons that were provided as a child. She can read, a little, enough to catch the gist of a message, and she can work with numbers, as long as they don't go higher than her fingers. Etiquette has never been a necessity, so it's something she's never taken much notice of, except to know that she'd better bow when a Lord or Lady walks by. In short, Ranni is rough around the edges, and her life so far as made her a little hard and skeptical of others.

History of Persona:
Ranni's full name is Averanni, but the only time she'd ever heard it used was when she was in trouble. Most people know her simply as Ranni. She was born at Sunstone Hold and had never been anywhere else, not even to one of the outlying cotholds, until she was Searched. Her father was a passing sailor, and her mother a drudge in the kitchens. Ranni and her mother love each other, but their relationship is awkward at best.

As a child, Ranni played with other holdbrats without thinking of rank or station, but as she slowly aged and watched her "betters" look into crafts, or talk about being Searched, Ranni began to realize the difference between herself and her friends. The reality was that once basic harper lessons were over, Ranni would be just like any other drudge at Sunstone- working in the kitchens, cleaning floors, or emptying out chamber pots. It wasn't glamorous, and it was a hard wake-up call that killed any dreams of doing something outside of her station.

When she was fifteen, Ranni was given a bed and trunk in the drudges quarters, and living with so many others in a small space taught her a lot about sex, love, and drama. Being a drudge has shown Ranni the "underside of the quilt" when it comes to Sunstone Hold. On the outside everything looks sunny and pristine, but underneath, the drudges, the silent witnesses, see all of the politics, affairs, and subtle nuances that make Sunstone tick.

At eighteen Ranni was promoted from cleaning floors to serving Lady Xeladrie once her skill with hair was noticed. To Ranni, there wasn't much difference between weaving baskets or threads, and weaving hair. Unfortunately, Ranni's manners weren't the best, and she had a lot to learn about being a Lady's maid.

Ranni became very attached to Lady Xeladrie, but extreme circumstances forced the drudge to hide a life-and-death secret for her Lady. In order to make sure that Lord Bryvin would never find out, and to keep herself safe, Ranni convinced a young greenrider from Dolphin Cove, A'vel, to Search her and take her to Dolphin Cove Weyr. Once there Ranni was confirmed as a Candidate by Searchrider Riveenata.

Even though the Searchrider confirmed that Ranni had Candidate potential, Ranni still felt frightened of being sent back to Sunstone Hold and to give herself some security, she encouraged the advances of bronzerider R'nar, the Weyrwoman's son. In Ranni's estimation, a relationship with the man would guarantee she could stay at the Weyr if the worst happened and she didn't Impress.

On m11 d20 t9 Ranni Impressed to Green Sukiith, securing her place permanently at the Weyr.

Not long after Impression, Ranni found out that she was pregnant with R'nar's baby. Despite her initial misgivings, she decided to keep the child, in the hopes of having a girl that she could name in honor of Lady Xeladrie. During her pregnancy, despite R'nar's help with her Weyrling chores and keeping Sukiith cleaned and oiled, she continued to treat the bronzerider with disdain. Her experience with men had taught her that they would use whatever power they had over you for their advantage.

On the eighth day of the second month of Turn 10, Ranni delivered Eranar, their son, who was a couple of sevendays early. The labor and delivery were complicated and Ranni spent a couple of days unconscious and clinging to life. When she awoke, it was to find R'nar waiting for her, and the first time she held their son some missing piece inside of her became full.